The Dragon caves were astounding! We arrived as just one of many buses and our hearts sank as we queued to show our tickets and descend the steps into the caves. There were hundreds of people at the entrance but after about 200m the caves opened out and people spread out along the walkways. The whole walk through the cave was approximately 1.5 km and you went through many chambers with thousands of stalagmites and stalactites and the roof covered in ‘straw like’ stalactites. The chambers were very sensitively lit without coloured lights, which made it very natural looking. Photos do not do it justice. 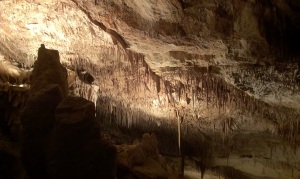 There was also quite a lot of water in the cave, so clear and smooth that you often could not tell if it was just the cave or a reflection. The walk took us into a huge chamber with a 170m long lake (2-12m deep according to the information). In all there were probably 500 people and we sat on benches carved out of the rock.  The lights were dimmed and people became hushed. Three boats with lights round their gunwales appeared on the lake at one end. They were being silently and slowly rowed along and in the middle boat a string quartet started to play. It was like something straight out of “Lord of the Rings”. Pachabel’s Canon, Elgar’s Chanson du Matin and the Bacarole from the Tales of Hoffman provided the sound scape. It was a very moving experience.

The way out was a choice of walking back the whole way or taking the boat across the lake and then walking. Guess which one we chose! The Dragon caves are a real wonder and if you ever find yourself in Mallorca, go and visit them and see for yourself. 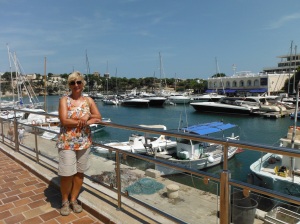 At Porto Christo near the Drach Caves

On the way back, we passed Raphael Nadal’s Grandfather’s house in Porto Christo. Our guide told us that the family were already rich in his day (as the big house testified) and therefore Rafa was able to devote himself to tennis!

The next day we left the Ports IB town Quay and motored back to the lovely anchorage we had been in before. Unfortunately the wind had changed direction and the anchorage was not at all sheltered and so we headed across the bay to a more sheltered spot. Luckily this was more sheltered, but it was still a very rolly night and we did not get much sleep. The next day we recovered from the bad night and took shelter from the sun. It was extremely hot.

We set off for Menorca the following day (10 August). We had had another rolly night so we were glad that this was not a long overnight passage, only 35 miles. Typically there was absolutely no wind and we had to motor all the way. We madeour way to Cala Son Saura on the south coast, a large cala that we hoped we would find some room in. The Balearics are extremely busy at this time of year as the French, Spanish and Italians all have August as their holiday month. We were in luck and we managed to find room. We were glad that we had arrived about 4pm though as all the spaces quickly filled up. We have to anchor much closer together than we would be comfortable with in Scotland, but generally people are sensible. 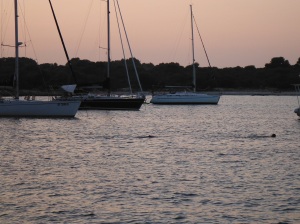 One way to get home at the end of the night!

We had another disturbed night due to swell coming broadside on as the wind dropped! The day was fine though and we took the dinghy ashore and walked along the beach and round into the next Cala. The tourist boats had disgorged their passengers and there were loads of people staggering round the headland with inflated Lilos, cool boxes, chairs etc etc…. It was a beautiful spot but we decided it was much nicer swimming from the boat, so headed back. I am still very wary following my bad jelly fish sting, so we both inspect the water carefully before going in. Luckily the water is crystal clear.

We spent a couple of nights in Cala Son Saura and then headed to Ciutadella at the west end of the Island. Ciutadella must be one of the most impressive harbours anywhere as it is like going up a gorge with the town at the end.  We had been to Ciutadella before on a family holiday in 2000, but motoring up the narrow cala is something else. We treated ourselves to a lovely meal out in the evening in a small restaurant overlooking the harbour.

Looking down on the harbour. 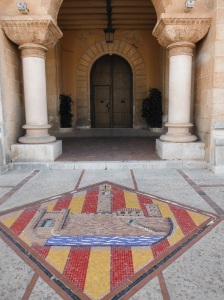 Luckily Menorca has not suffered from the over development of Mallorca, so there are hardly any high rise hotels here. Nearly 50% of the land area is set aside as Natural Park and they have several marine reserves as well. The north part of Menorca has very different scenery to the south side. Not Many limestone Calas with Aleppo pines coming down to the sea here. Instead there are stark slate cliffs and headlands with little vegetation at this time of year. 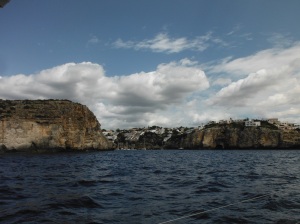 There are exceptions though and we went to a lovely wetland reserve at Es Grau near Mahon where we saw many Egrets, ducks and even an Osprey.

Our anchorage at Es Grau – close to the rocks!

We read recently that the development of Mallorca was sanctioned by Franco as Mallorca had supported him during the civil war. Menorca had been on the opposite side, hence no development.

We are currently in Fornells, another gorgeous spot. It’s a very small fishing village on the north coast, which has remained small and relatively unspoilt despite the hordes of tourists that flock here in the summer.

We are tied up to the Town Quay, part of the Ports IB group. In a few days we will depart the Balearics and head off to Sardinia (a 48 hour trip), so we will now stock up with food and fuel and watch out for a decent weather window. It feels very strange to be leaving the Spanish speaking Med behind. Our Spanish is not great but it is all so familiar to us now. I think Menorca has been our favourite Balearic Island, perhaps because it is least built up, however perhaps also because we have learnt the “system” with anchorages and Ports IB and the Possidonia buoys . New adventures await in Italian waters.