We spent our last four nights in Menorca in a fantastic anchorage at Addaya, just 7 miles east of Fornells and a good jumping off point for the crossing to Sardinia. We dropped anchor in only 3 meters in a very sheltered lagoon where Kingfishers flitted across the water, lots of fish swam and booted Eagles soared above the gentle hills. It was easy to get ashore and walk along the track towards the Salinas (salt pans) which are a bird reserve). In the other direction, the path wound up a steep hill and past private Fincas into the small town of Addaya. The path was actually part of a long distance footpath called the Cami de Cavells which skirts the whole of Menorca. It was originally used as an early warning system for pirate attacks, using the many beacons stationed around the coast. We met a lovely British couple (Mel and Clive) in the anchorage. They had cruised round the Balearics for several years and had just returned from a few months in Sardinia, so they gave us some great information about good anchorages in Sardinia. 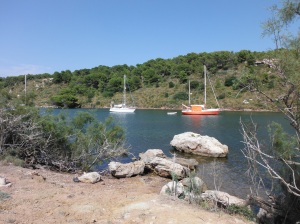 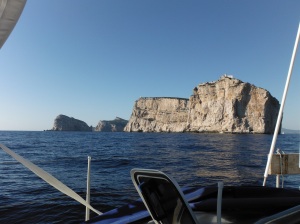 We set off from Addaya at 7am (sunrise) on the Monday 25th August. We took the first weather window available and it proved to be accurate. There was a gentle S wind and we even managed to get “Miss Scarlet” our Hydrovane self-steering going again. In all we probably sailed half of the 185 miles. The crossing was uneventful and the only wildlife spotted was a turtle and 5 Storks flying west (presumably the early migrators). As ever, the stars were fantastic during the night with Venus and Jupiter rising in the morning giving a lovely display. We arrived in Porto Conte, just west of Algherro, after 36 hours of sailing.  There was plenty of space to anchor and it was sheltered and we both slept well in the evening after tea and some Cava to celebrate!

The next day (27th August) we sailed round to the north coast and anchored near Stentino in the most wonderful green water. We had seen pictures of this part of Sardinia but it’s hard to believe that the colours are real, but they are! The water is also lovely and warm for swimming. The anchorage was quite exposed and although many boats were there during the day, most of them left, leaving only a handful of us anchored overnight.

We needed to push on, as our friends Fiona and Gordon were arriving in Olbia on the 4th September and we wanted to get there in time, especially as the long range forecast predicted another Mistral at the beginning of September. So the next day saw us set off for Castelsardo. It was only a 27 mile day so relatively easy and we were going to stay in the Marina there for a couple of nights. As ever, the wind and waves really laid on a good display just as Andy was heading into the tricky entrance, however all went well and we were soon settled on our berth. Castelsardo is a spectacular town, with multi-coloured houses clustered round the castle on the craggy hill. The castle is a bit like Stirling, but there the similarity ends!!

We spent a lovely couple of days in Castelsardo, getting our ears attuned to the Italian language and exploring the castle and the little streets. There was a supermarket right in the marina which made stocking up really easy too. At night, the castle and some of the buildings were lit up, making it very magical. We did find that things were a bit dirtier than Spain though. Not much is spent on cleaning pavements or picking up litter and lots of weeds were growing everywhere. We wonder if this is typical of all Italian towns.

Looking down on Castelsardo from the castle ramparts

A battering Ram (literally as its a carved ram’s head!)

Beautiful tiled roof of the campanile

Cork. A huge Sardinian industry. No harm comes to the trees during harvesting. The industry is under threat from Screw tops and plastic corks!

The bear mountain (granite landscape near the Maddelena Islands)

From Castelsardo it was just a couple of days to Olbia. We loved sailing past the granite cliffs and strange rock formations. It certainly made a change from the limestone scenery of the Balearics. The Maddelena islands also looked wonderful. They are a national nature reserve and we hope to explore them later. This whole coast here in the NE of Sardinia is called the Costa Smeralda and is considered very exclusive. It was “discovered” by the Agha Khan in the 1960s and his money and influence ensured that the developments were small and more Village like (no high rise hotels here). Consequently it has become the playground of the rich and famous, but has also protected the environment.

We saw some dolphins as we were cruising along, but they were intent on fishing and not playing. We also had a wonderful sighting of a shoal of Tuna herding the small fish in a feeding frenzy. The tuna were leaping out of the water and slicing through the waves with their scimitar-like dorsal fins.

We arrived in Olbia on the 31st August just in time as a Force 8 gale was forecast for the 1st September. Everyone at the marina is very helpful and some English is spoken. This is now our berth until the end of May 2015, although we may leave Olbia earlier than this. Olbia is a proper working town, with a port, ferries and cruise ships and some industry. It does not take long to get away from that though and into some magnificent cruising areas.

In Olbia Marina, our winter home

Our friends arrived as planned on the 4th September and we have had a great week with them, exploring some of the local anchorages and swimming in the lovely warm water. We were even lucky enough to get a close sighting of some dolphins at our anchorage at Isola Tavolara a nearby island. We didn’t put them off sailing, despite needing the sea sick tablets!  It was great to have company after 3 months of just the two of us and we are looking forward to seeing more friends towards the end of the month and early October. 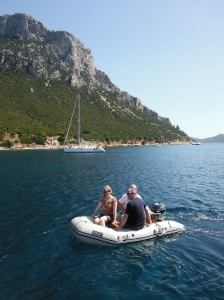 Gordon at the wheel 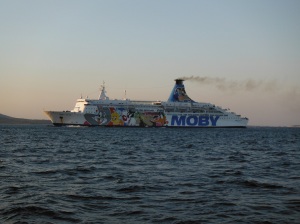 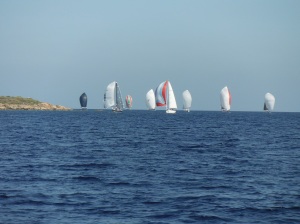 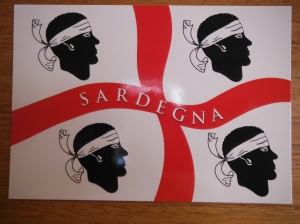