Well it’s the end of another sailing season. We know this because our flights home are tomorrow and because it’s blowing 30+ knots with rain and thunder! The start of Autumn here in Kalamata. The waves are breaking over the breakwater but Vaila is safely out on the hard and we are just doing the last packing and cleaning jobs.
Our friends Trina and Joe arrived to sail with us on 14th September and we had a great week with them. The first day was quite windy so we explored the old town and castle in Kalamata. 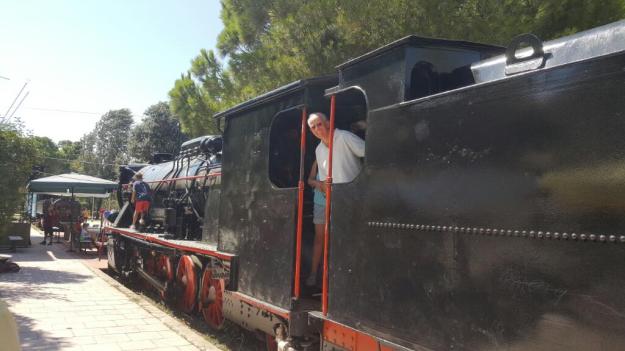 The quirky railway Park in Kalamata

We left early the next morning for the 40+ mile trip to Methoni. We managed a good sail for the second half of the trip and dropped anchor amongst a few other boats in a strong breeze. 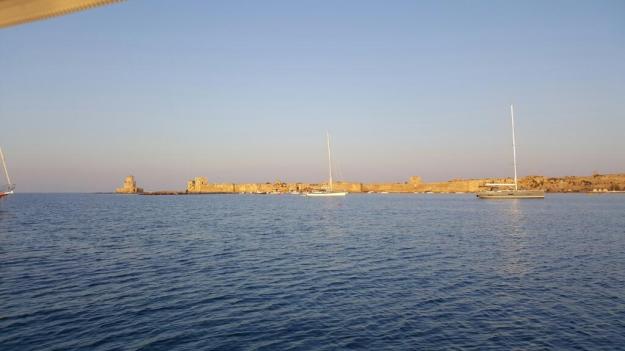 The next day was fine and we spent the morning catching up on news and swimming from the boat. The wind was rising all the time though so we set off for Navarino bay at lunchtime.

Andy and Joe rigged the staysail and we all had a good shot at helming in the 15+ knots of wind on the nose. It took a few tacks to get through the spectacular opening into Navarino bay, but once inside it was calm and we anchored in our favourite spot in the NW corner. There was only 1 other boat anchored there, ALIZE ,so we had a lovely quiet evening under the milky way with a few shooting stars thrown in.

We took the dinghy ashore the next morning and walked up to the ruined Venetian fort. Unfortunately Joe tweaked his back so stayed on the beach. It was spectacular balancing along the half broken battlements and the views were stunning. 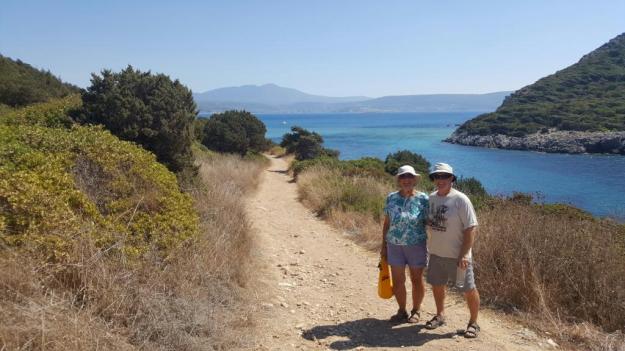 Looking down towards our anchorage in Navarino bay

Trina and I swam back to Vaila and Joe also managed. Then we headed back to Methoni. It was a quick sail so we were anchored by 6pm in time for a swim and dinner ashore. A windy night followed but it was not too uncomfortable.

The next morning we got ashore to explore the better preserved Venetian fort at Methoni . Joe borrowed the crutch (which I have had on board since Cadiz!) and managed OK. Trina and Joe were suitably impressed by the Fort and Turkish tower.

Coffee stop with a view at Methoni 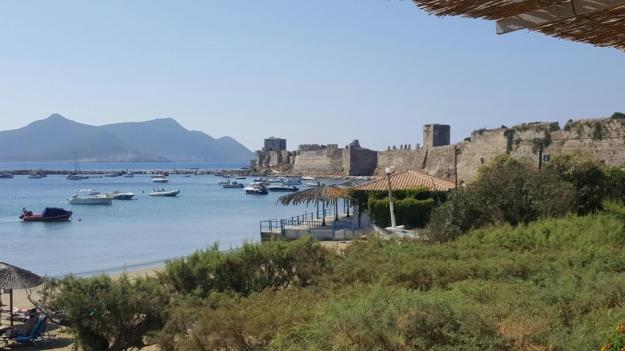 This is the view

The evening got windy and we moved Vaila closer in to get out of the swell and fortunately we had a quiet night. However , we were rudely awoken at 6am by an approaching thunderstorm. Our thunderstorm app showed a large thunderstorm cell approaching, so off before dawn , watching lighting striking the water only a few miles away! We put the phones and tablet into the oven a couple of times (as it acts as a Faraday cage), but we were lucky and storm veered off , so the rest of the sail back to Kalamata was uneventful.

Trina and Joe left the next day (21st September). We had a sociable time after they left too with various folk from other boats . The weather became more unsettled and we only managed a few day sails.

It’s been a good year with more sailing than motoring , covering 700 miles over 3 months. We like Kalamata and Vaila will be safe and well looked after on the hard until we return next year. 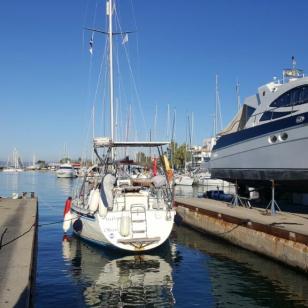 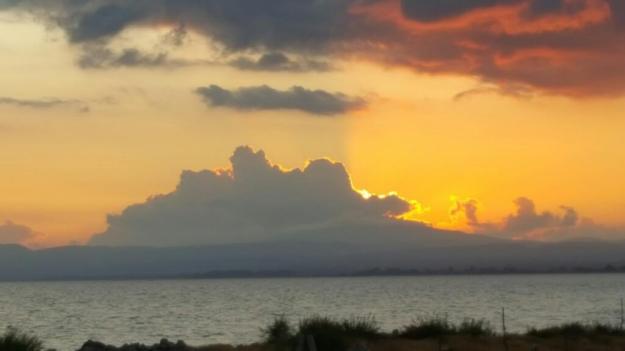