We sailed south from Volos (lat 39 deg, 21′ N, long 022 deg, 57′ E) on the 6th of September and explored the SE corner of the gulf, anchoring in a large bay just south of the village of Milina. There used to be a sunsail base there but they pulled out 4 years ago and now there are just lots of moorings. We did manage to find a space to anchor and had a quiet night. It was so nice to be away from the bustle of Volos town. 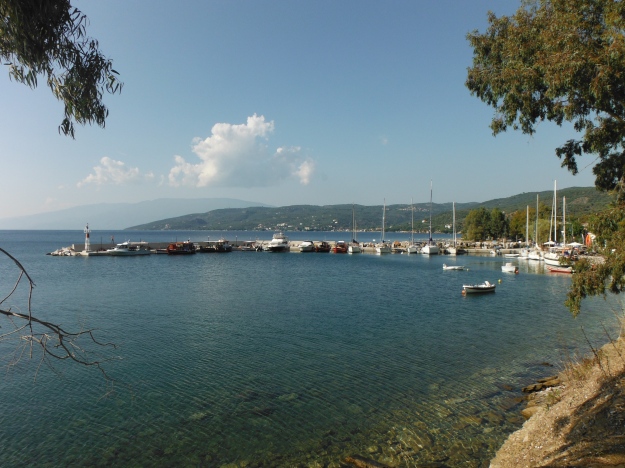 We headed over to the tiny harbour of Milina ( lat 39 deg, 09′ N, long 023 deg, 13′ E) the next day and found a space on the quayside. It’s a very small place with room for only about 10 yachts. The village seems to be a quiet holiday destination for German and British tourists.

We met a Scottish woman and her husband who run a charter business in Milina. They used to run the Sunsail base and have lived in Greece for 20 years. Christine and Andy now run A and C yachting Milina and they were both very busy turning their two 45 foot charter yachts round for the next clients. It appears that they don’t have a lot of time for sailing themselves these days, however they invited us to their yearly regatta the next day. It was for the prestigious trophy called the “String Cup” very reminiscent of a ladies thong made of metal!! 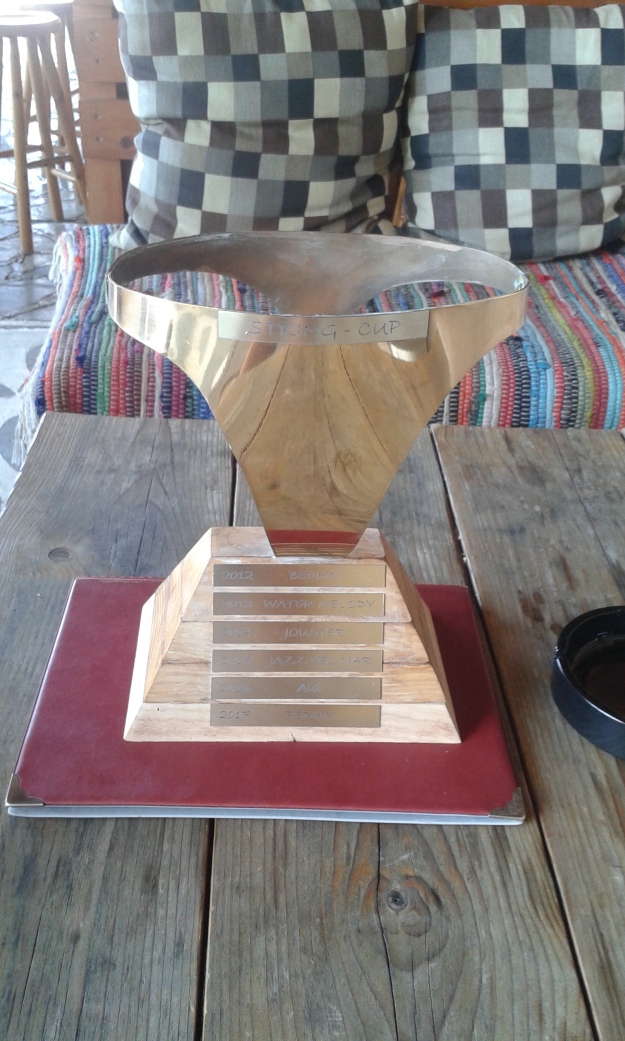 The “String Cup” which we failed to win!

Regatta day dawned with little wind. The race start was 2pm and we were hoping the wind would pick up, but it was not to be! About 20 boats of all shapes and sizes were taking part and jockeying for position on the start line in hardly any wind. We limped across in the middle of the fleet but quickly overtook a lot of the boats with great helming skills from the skipper in the fierce 5 knot wind!!

We were actually the third boat round the island and on to the down wind leg and even managed to fly the Cruising chute for about half an hour, but the wind died completely and by 6pm we decided to start the engine. It was all a good laugh and we headed off to eat at one of the Tavernas listening to a jazz band playing on the harbour side.

We had 2 more nights anchoring on the west side of the gulf of Volos which were fairly windy nights. We were entertained by flocks of storks flying over, heading for the wetland area inland. Then we headed over to Orei at the north end of Evia island ( lat 38 deg, 56’n, long 23 deg, 05′ E) to stock up with food and water. There was no room on the north quay but we managed to come alongside on the south pier. Unfortunately we could only stay there 1 night as Sailing Holidays flotillas use this pier 2 days a week. So a very quick turn around doing shopping, defrosting the fridge and filling up the tanks with water. Andy also had to go up the mast to fix a broken block for the lazy jacks (which stop the sail from spilling out when the sail comes down) and replace broken sail slides.

We were ready to leave the next day as planned and headed over to Skiathos in a 15-20 knot wind giving us some great sailing on a close reach. We anchored in the large bay of Koukounaries on the south side. It was a busy place during the day, with tripper boats, jet skis, water-skiing, and several large hotels ashore. Luckily, it all quietened down at night and we had a great sleep after a few disturbed nights.
We sailed into Skiathos town on the 14 Sept but decided not to stay, as the town quay was pretty full and the main road and tavernas are directly behind the quayside. The harbour also has the added delight of being on the flight path for Skiathos airport, which means you can almost see the pilots faces from the boats on the quayside!

We prefer Skopelos, so headed over to the wee harbour of Neo Klima, where we had been earlier this year ( lat 39 deg, 022′ N, long 23 deg, 38’e). It was much busier now than it had been in May, with a lot of apartments full and the beach with sun loungers out, but we still found it a delightful place and were pleased to stay for a few nights.

Having the beach right there was a definite plus point. We met a lovely British couple, Lynn and Bill from Pied a Mer, who were telling us about the sailing rally they joined to the Dardanelles and the Black Sea. They said it was a fascinating experience but not one they would repeat!
After a couple of lovely days in Neo Klima, the wind got up and made life difficult with severe gusts coming down the mountains and blowing boats sideways.

Everyone had to add extra lines and we had to move alongside as our anchor did not seem secure (Andy dived down and found that the anchor shackle was sticking and so the anchor had not dug in fully). Luckily we managed to move with help from 2 other boats. It was a tense day with wind howling down the mountains.
The long range forecast for the next couple of weeks did not look good, so we abandoned plans to go south via Skiros and we decided to take the inside Evia channel which is more sheltered.
We returned to Orei on the 18 September to stock up with food and water again and to top up the batteries. The sail over was pretty wild, as it was gusting 25 knots as we left Neo Klima, but we were on a reach and had rigged the staysail, so we had staysail, reefed jib and reefed main up and were flying along at 7.2 knots at one point (with Petra helming)! The wind strength dropped to 15-20 knots and Vaila romped along between 5-6 knots. 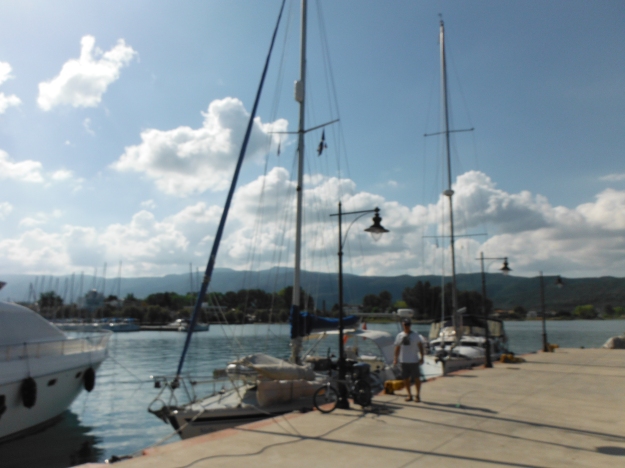 We met up with Lynn and Bill again in Orei and spent a couple of lovely evenings with them.

Bull statue from 4th century BC found in Orei harbour

Andy and I also got the bikes out and cycled along the coast. There are wetlands just behind the beach in Orei, so lots of reedbeds, butterflies, birds, but also mosquitos and horse flies! At one point we came across a terrapin crossing the dirt track. Luckily it got across ok and plopped into the pond on the other side. This bit of the coast looked like it was going to be developed but it never got finished, with a lot of half started properties around. 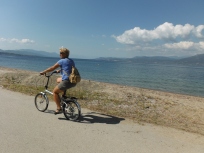 An angler set up multiple rods right next to Vaila every morning in Orei. He arrived about 5am in the dark and fished until 8am or so, with varied success! Two mornings we were woken by small fish flapping on the deck. It sounded so loud from inside our cabin!
Today (22nd September) we have started our trip down the Evia channel. It was a lovely day but not much wind until this evening. We saw flying fish and even hit a real tidal race. We are now anchored in a small bay and thankfully the wind has dropped. Unfortunately there are a few ‘fried egg ‘ jellyfish passing in the current, so swimming is a bit limited. We plan to go though the bridge at Khalkis on Monday night. It’s a swing bridge over the narrows and only opens at night. The Evia channel is very tidal so the opening times vary. On Monday night the bridge opens at 0330, so we hope to get a couple of good sleeps before the night passage. 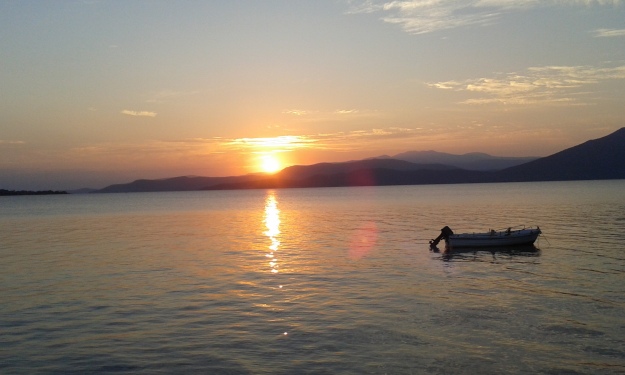 2 thoughts on “Rocking, rolling and racing!”