We’ve had our first week back on Vaila and already covered 200 miles! We arrived in Thessaloniki late on the 28th August with our friend Trina. Vaila was fine in her berth after our 10 week trip home, so all we needed to do was stock up with food, fill up with water and then we set off the following afternoon for an overnight trip to Panagia in the Sporades. 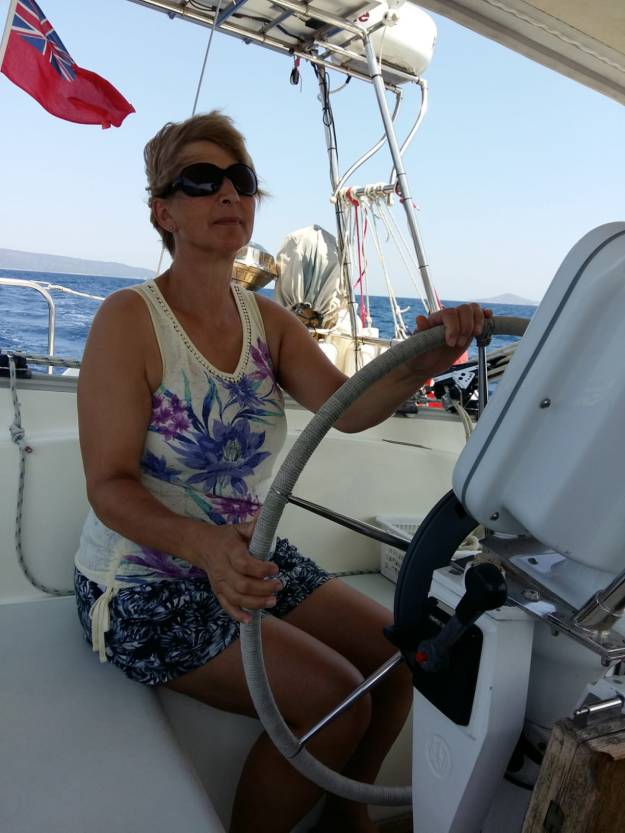 The shipping lane from Thessaloniki was quiet and although there was some wind it was on the nose, so we motor sailed nearly the whole way. It was an uneventful passage with a full moon rising near midnight making the stars recede. Andy and I took 3 hour watches and Trina sat up till the small hours, enjoying the novelty of being on a small boat sailing at night.
The beautiful northern anchorage in Panagia was almost empty so we had our choice of anchor spot when we arrived 11am. We spent a lazy day swimming, reading and recovering from a long night. 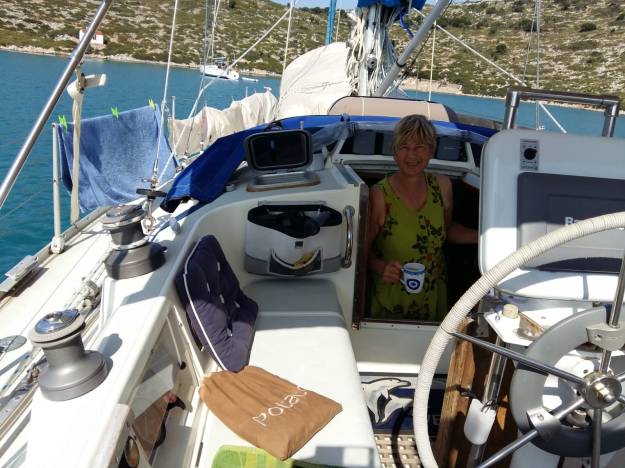 As the day wore on more yachts arrived but there was plenty of room for everyone. Unfortunately, some “fried egg” jelly fish (they really do look like fried eggs and are about 30 cm across), were drifting into the anchorage. These are stingers, so no late swim for us. We enjoyed a BBQ in the evening and some bubbly for “arrivals” followed by a long sleep during a calm night.
We woke feeling refreshed, and Trina had a swim with me on jelly fish patrol! Then we headed out of our anchorage. As we approached the entrance we realised how windy it was, with waves crashing against the rocks on either side of the narrow entrance. The engine had to work hard to get through the rough stuff but we got sails up and turned round the corner into the lee of the island and made good progress. It was a lovely sail down the channel between Alonissos and Peristera but we had to put the engine on again to get into Skopelos town where we came stern-to onto the quayside. 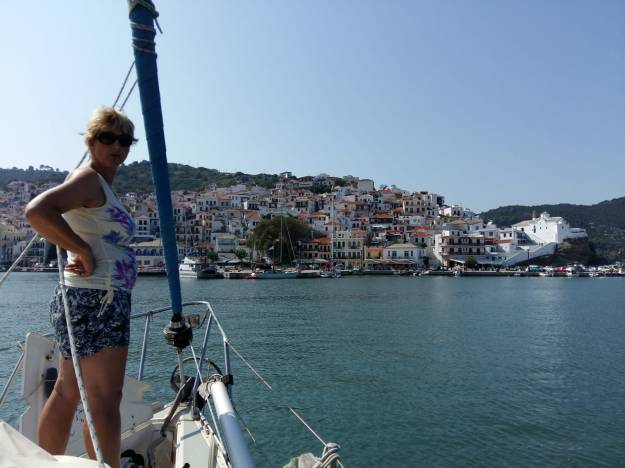 Two familiar faces greeted us and helped us with our stern lines (Sarah and David from Shearwater, who had been at the same boatyard as us last winter).

We spent the late afternoon wandering around Skopelos town and finding a trip to take Trina and I round the island and to the chapel of Agios Ionnanis (which featured in Mamma Mia) for the next day.Then we found a great spot for dinner in the back streets well away from the busy front. 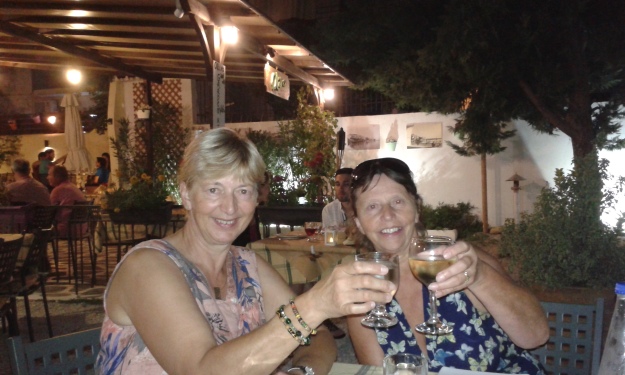 Trina and I had an early start on the 1st September as our minibus tour started at 0815. There were only 10 of us and we had a lovely drive up the west coast with our guide, Despima, telling us about the history of the island. The Sporades were really out of the main trade routes but were often subject to pirate raids, so most of the towns are high up the hillsides. It’s only recently that the the coastal harbours been developed. 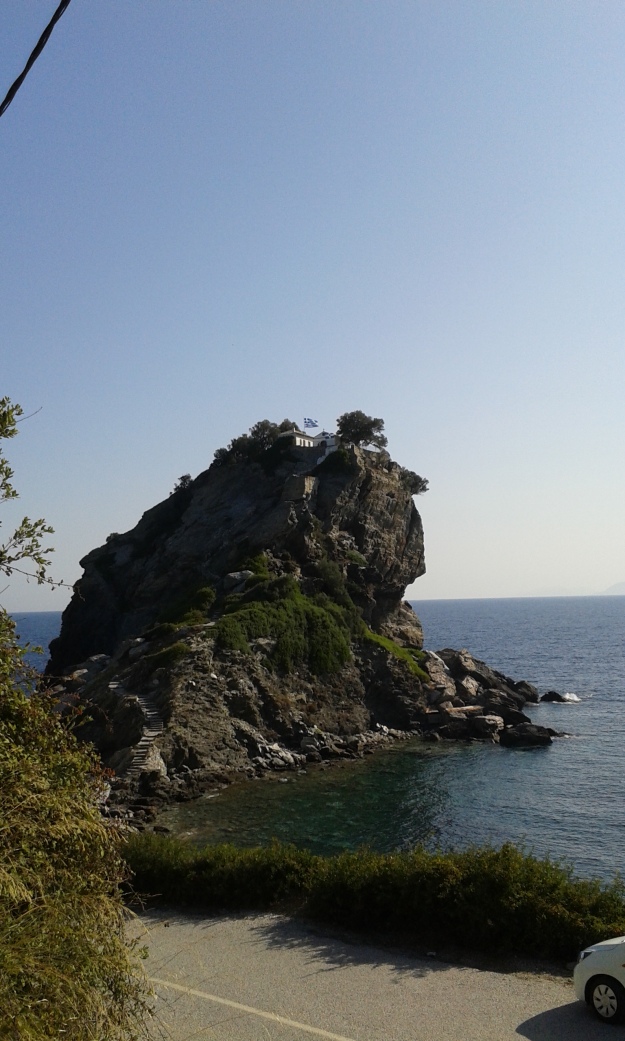 The chapel on the rock is really iconic and spectacular (as anyone who has seen Mamma Mia will know). There are nearly 200 steps cut into the rock to take you up and thankfully, the upper steep sections now have handrails. 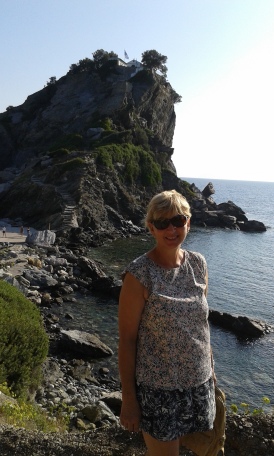 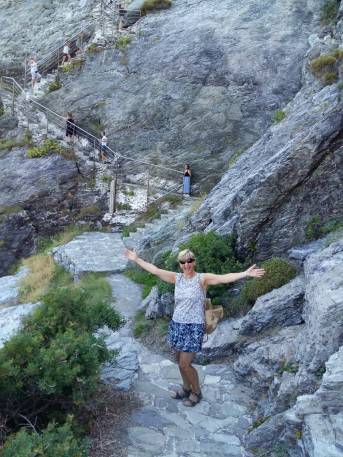 The view from the top was beautiful, looking over the cliffs with crystal clear water below. The inside of the chapel was tiny, with a wooden ceiling painted blue, lots of icons and and lit tapers in a central trough. The scenes from the film inside the “chapel” were not filmed here, but in a villa on Skopolos. 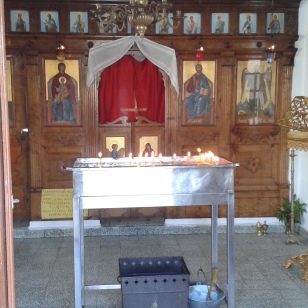 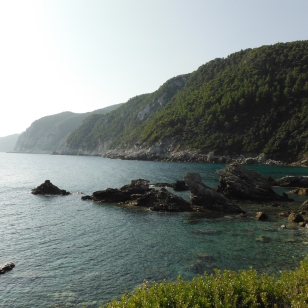 There were a few devout Greeks on our trip who were kissing the icons and lighting candles. The chapel is dedicated to St John the Baptist and was founded by fishermen in the 17th century according to legend. 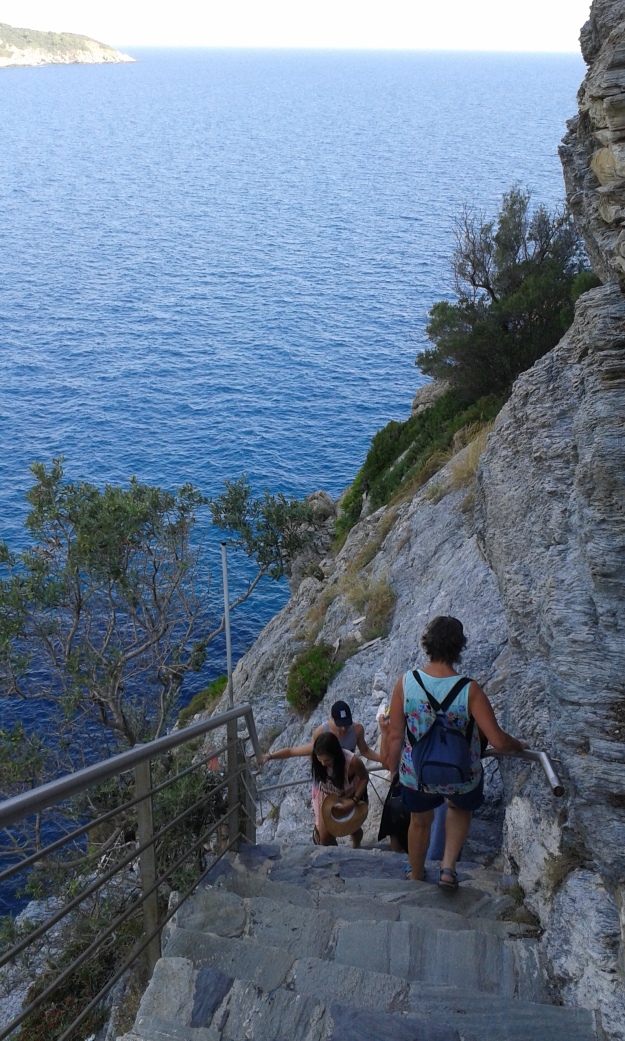 We left the chapel at about 10am and we were glad we had arrived earlier, as it had been cooler and we were the first visitors of the day. We drove back down the road and stopped at Kastani beach where we spent the afternoon blissfully lazying on sunbeds and swimming. The beach was busy and there was some music playing from the beach bar but it wasn’t too loud and we had a great afternoon. 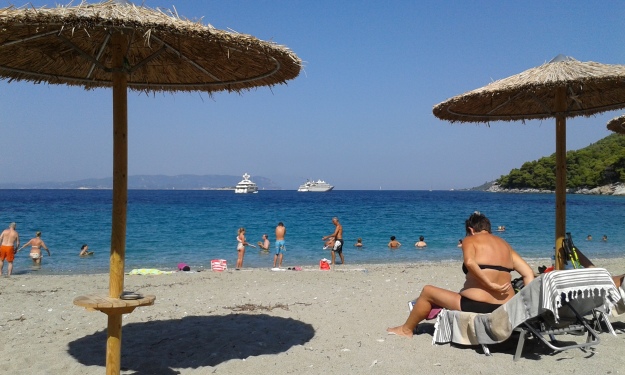 We got back to Vaila in the late afternoon, stopping for an ice cream on the way. The skipper had filled up Vaila with diesel and water and had also managed to have coffee with Sarah and David and friends while we were away, so we didn’t feel too guilty! The trip would not have been his choice anyway!
After a much needed cup of tea, we headed up the steps to our favourite sunset bar at the top of the hill. We had to gate crash a baptism going on at the tiny chapel half way up, as the steps went past there and the extended family were sitting there waiting for the ceremony to finish. Trina loved the view but unfortunately not the house wine, after the delicious freshly squeezed orange, which was a Retsina style. Neither of us drank much of it! You win some, you lose some. There were some amazing hawkmoths feeding on the flowers. Some Humming bird hawkmoths and other species. They really were the size of humming birds and expertly sucked the nectar with their long proboscis while hovering. 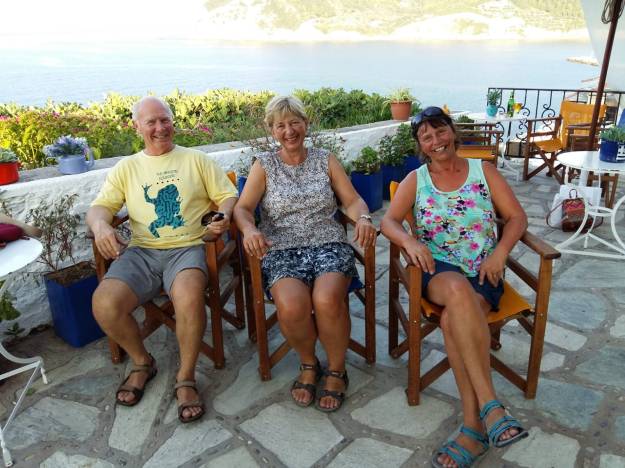 We had dinner back at Olivo, where we had eaten the previous night and it was just as good. We managed to get a table in the garden area this time. 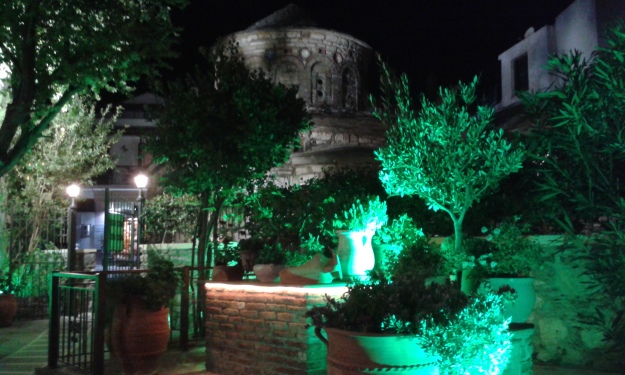 We left Skopelos town on the 2nd September and sailed west towards the mainland in a good breeze, which allowed us to sail most of the way. We were now heading into new waters for us. We passed Skiathos which did not look that inviting, as the planes approach and take off directly over the harbour. We anchored for the night in a little bay called Andriami with only a few houses ashore. “Sailing Holidays” were already there directing about 12 flotilla boats in, but we managed to anchor in the middle and there was plenty of room in the end.
A gorgeous bay with clear water and friendly people on the flotilla boats. One kind guy lent Trina his paddle board to try out and she managed really well. 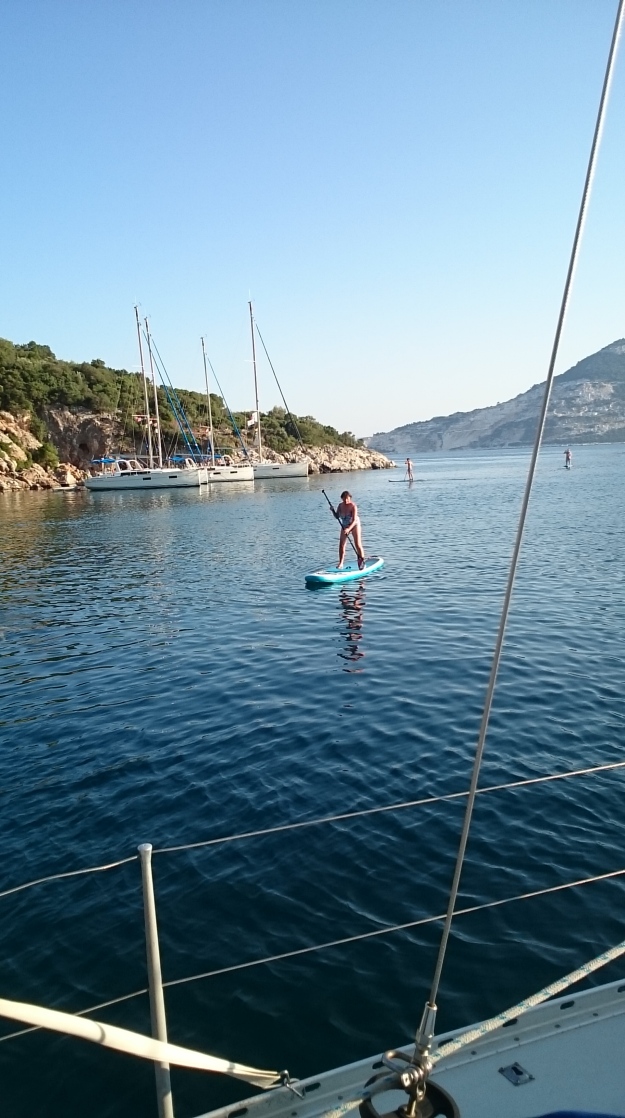 Trina on the paddleboard

Another BBQ in the evening and another bottle of fizz, but unfortunately this one had been shaken up on the crossing and caused a fountain!! We went to bed reasonably content though, despite our anchor not being that well dug in to the hard mud (on inspection by skipper), but there was no wind. 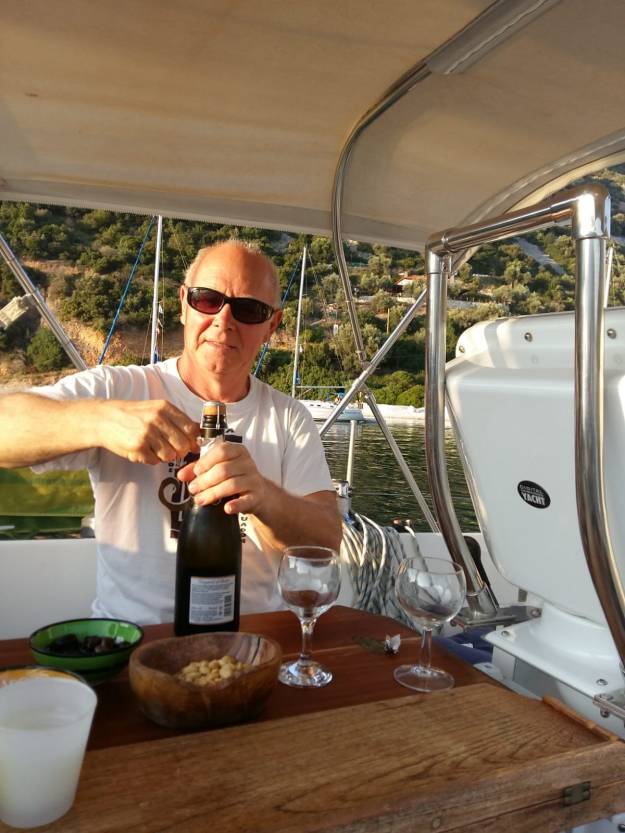 Before the fizz fountain!

Trina and I managed a swim before breakfast and we set off after to sail the 30 miles to Volos. There was no wind so we had to motor into the gulf and up to Nisos Pithou, where we stopped for lunch and more swimming. The islands were gorgeous, with red sandstone cliffs and the water was the warmest yet at 27.8 deg C and quite clear. Absolute bliss. 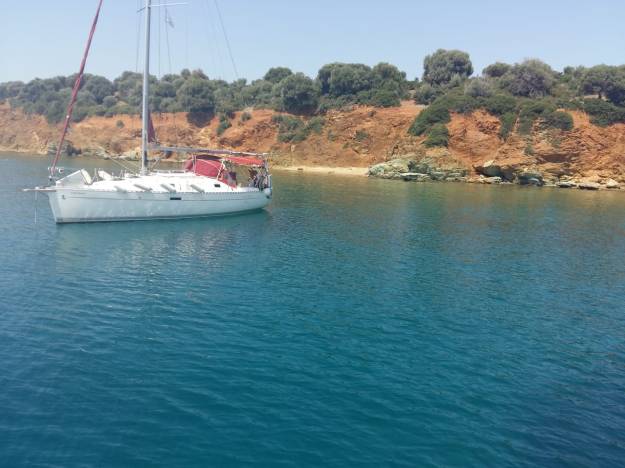 The wind got up from the south after lunch and we then managed to sail all the way to Volos town. We caught a tantalising glimpse of some dolphins chasing tuna on the way, but the dolphins were not up for playing! 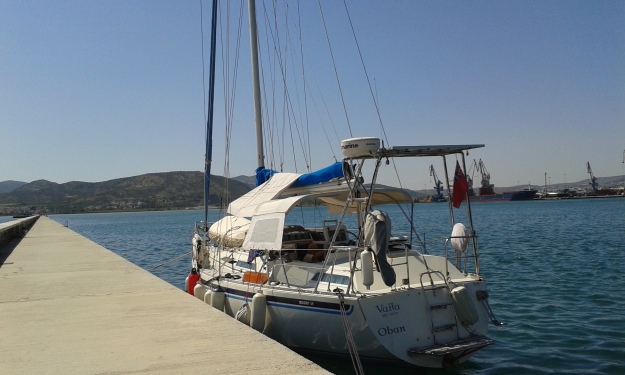 We berthed on the long breakwater close to a 200 foot superyacht “Forever” from Malta. We got settled and wandered into town to find the bus station, as Trina was going back to Thessaloniki the next day to catch her flight home. Volos seems like a lovely city. It’s a transport hub with big commercial key, ferries to the islands and bus and train connections. The Argo started from here, according to legend (Jason and the Argonauts and the golden fleece). There is a replica of the Argo on the town quay. 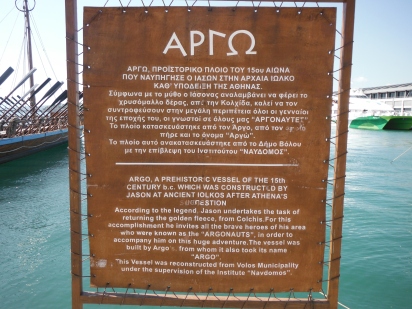 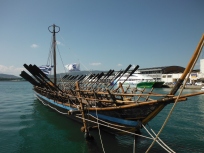 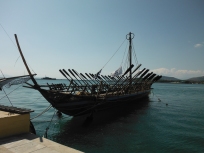 It was a long, hot walk along the waterfront, but we found the bus station and enjoyed taking in the ambience of this part of the city. The promenade was closed to traffic and full of bars, cafes, restaurants and ice cream shops. We had a lovely dinner later on the front and enjoyed the buzz of the city. An organ grinder was walking up and down the prom, a violinist was busking and Chinese ladies were selling balloons with flashing light tails. Lots of families were out enjoying the cool of the evening. 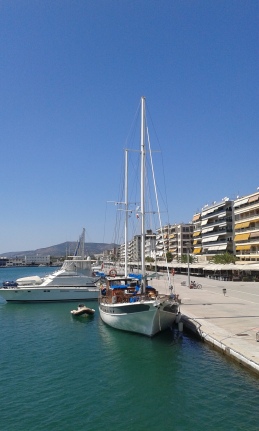 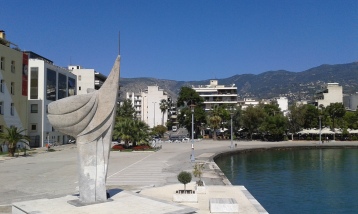 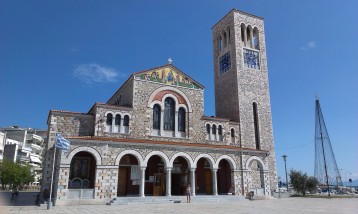 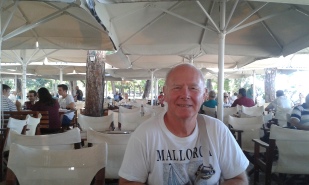 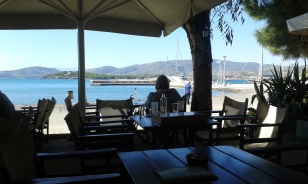 Trina left on the bus yesterday (5th September) and Andy and I are back to just us two. We were expecting our friend Paul to come out but he has had to cancel. So, we got laundry done, did a big shop and got ready to go yesterday, but unfortunately the wind is so strong this morning that we are pinned to quayside until it drops later this afternoon. We are in no hurry though so that’s not a problem.