We are currently hunkered down in the harbour of Batsi on Andros( 37 deg 51′, 24deg 47′ E, lat and long specially for you Pete) waiting out this 2 day storm with gusts of over 30 knots! We are safely tied on to the quayside, so feel much happier than being stern to on the quay where we were swinging in the strong head wind despite the anchor being well dug in. Mind you, it was a bit like sleeping inside a washing machine last night with the noise and waves pummelling on to the quay and Vaila.

Along side in Batsi

Andy has been in Greece since 17th April, fitting new solar panels, inspecting keel bolts, cleaning and polishing the hull, antifouling and lots of other maintenance jobs. I conveniently arrived on 1st May just when everything was ready! We had a few days ashore so took a day trip to the island of Evia just across from the boatyard.

Evia is yet another mountainous island although a bit industrial on the west side nearest the mainland. We crossed over on the old bridge, located on the site of the Roman bridge, which links to the island in the town of Khalkis instead of the new suspension bridge.

We headed up into the mountains on small, tortuous roads winding up and down and through the terrain. Goats were grazing on the lush green stuff. 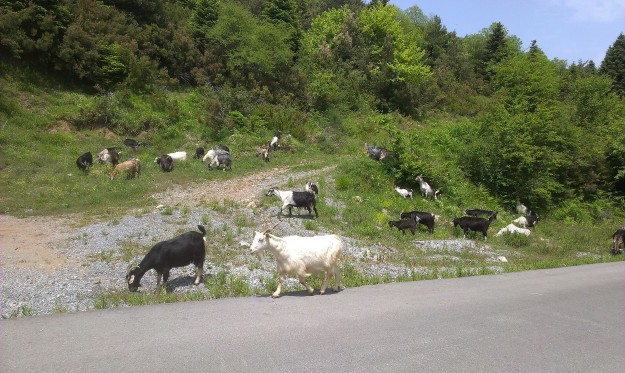 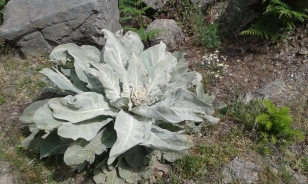 There were wild flowers and beehives everywhere. The beehives were all colour coded for identification, just like our sheep back home. 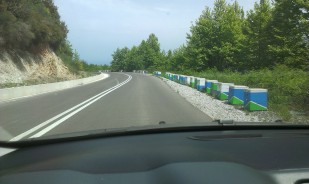 We stopped in a wee mountain village for coffee before driving over the crest of the ridge.

The clouds were coming in from the north east, covering the peaks which are over 6000 feet high and drifting down the high valleys. These high roads get lots of snow in the winter. Snow poles at the sides of the roads and even some ski signposts.

We dropped down to the dramatic east coast with beautiful cliffs and beaches and stopped for lunch in the town of Kimi.

We drove back to the west coast and waited in the town of Eritrea for the ferry. The double ender ferries shuttle across regularly, so we didn’t wait for long. We were the only car going across, with just a handful of foot passengers. 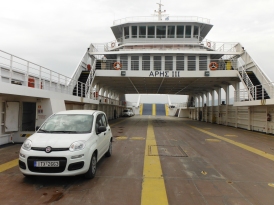 Andy took the car back to Athens airport the next day and I did some final prep for launch while watching the red Arrows display team practicing overhead. Apparently they were in Greece for an airshow. It was lovely and warm and I thought about a swim until I saw lots of brown jellyfish on the beach!!
We had been put on the trailer at the boatyard a couple of days earlier as they had to move us to get another boat in. So it was good to finally get launched on the 5th May with no issues. Vaila is happier on the water than sitting on a trailer.

Vaila on the trailer ready for launch 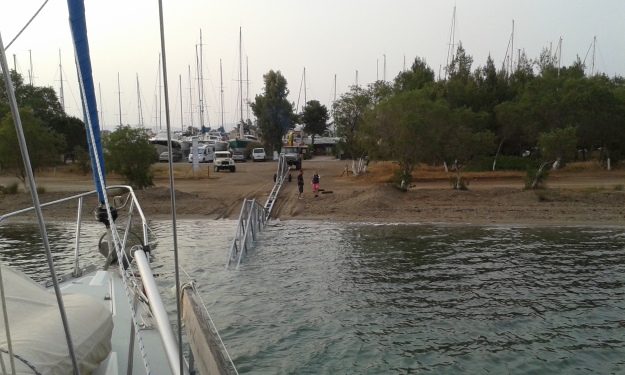 Launch by land-rover with extension bars for the trailer

We headed straight across to Eritrea and anchored in the bay, so we could go ashore and stock up with perishable food. Vaila’s fridge is water cooled so does not work on dry land. Unfortunately it was too windy to get ashore and it was not the quiet night we had hoped for either! It was very windy all night and we set the anchor alarm to alert us of any drift. We were up and down all night checking, as the wind had us all turning in all directions. Our anchor was solid but a couple of boats were motoring around in the dark trying to re-anchor.

The wind had dropped by the morning and we got ashore for the shopping, feeling a bit jaded after a broken night. A lazy day was had and as there were still jellyfish in the water, no swimming again for me. Luckily it was a nice quiet night weather-wise but unfortunately we were up again at 1am as a French boat had anchored too close and was nearly touching us when we had all swung round. He had too little chain out, so once he let more out, we were fine. Oh the joys of anchoring.
We got away after breakfast the next day, heading for Voufolo further down the Evia west coast. We managed to sail some of the way and then motored to get to the anchorage. It’s a lovely spot, tucked up an inlet and very quiet. Just handful of houses and a couple of tavernas, but a newish looking holiday development springing up. Evia is not far from Athens so a popular spot for Athenian holiday makers.
An elderly French couple came across to ask us to help them get their jib on. We had seen them in the boatyard previously. Andy went over to help which involved him winching the French chap up in a bosons chair so he could secure the top of the jib as the automatic hook arrangement was broken. It turned out the man was 74 and used to just shin up the mast in his younger days!
We dinghied ashore and the French couple invited us for a thank you drink. It turned out that they had circumnavigated the globe in that same boat with two babies on board, over 5-6 years in the 1970s. Remarkable stories some people have to tell. We ended up having dinner at the taverna with them too. The taverna was run by Stella, who was Latvian and had come for a holiday 22 years ago and ended up staying! A lovely peaceful night and a return to Vaila in the balmy darkness.
We headed further south the next day to the Petali islands. We had been there last year and knew it was a lovely, sheltered anchorage. We arrived in the late afternoon with a smart wind. It was good holding and the wind died down in the evening giving us a quiet night.

I managed my first swim the next morning in flat calm and crystal clear water. It was bracing at 18 degrees C but lovely. We tried to leave fairly early as we had quite a long way to go. The wind was on the nose so we ended up motoring, especially as we had to cross the busy shipping lane between Evia and Andros. Quite a few tankers and container ships on route to and from Athens.
The harbour at Batsi is nice and sheltered. It’s big but not too busy and Yannis, the young harbour master, helped us with the lines. Our first stern to mooring of the season and it all went OK even in the rising wind.

Batsi harbour before the wind got up

So, here we are still in Batsi but moved on to the quayside alongside. It’s still blowing a hoolie on day 2. We managed a walk up into the hills above the town yesterday. Lovely views everywhere and old ruins of church and monastery high on the hill. All the vegetation was already dried up. It’s very different geology here, no limestone but slate and schists. Dry stone walls all over the place giving steep terraces. Nobody lives up there just now but new apartments and villas are going higher up the hillside.
We are hiring a car tomorrow to see a bit more of Andros. The weather forecast is for more gales in the Cyclades in the next week but it looks calmer further north so it looks like Andros will be our only Cyclades island this time.