My friend Sandra arrived on the 21st of May in Kalamata, just after Sally left. We had several loads of washing to do and luckily the rain stayed off and we managed to get all the washing dry. The following day was spent shopping, as the shops are not open here on Sundays, getting a replacement gas cylinder and more washing. We had coffee in town and dinner in one of the Tavernas by the marina. We could enjoy sitting outside without feeling cold, which was a first for this trip!
We left on the Tuesday morning to sail to Methoni, approximately 40 miles. A lot of motoring as the wind was light in the morning, but it freshened in the afternoon and we got Sandra on the helm.

Sandra at the helm

We dropped anchor off the Venetian fort amongst about 8 other boats (one of them was Sundance, with Marc and a Norwegian couple on board). We know Marc from Messalonghi and Preveza marinas. 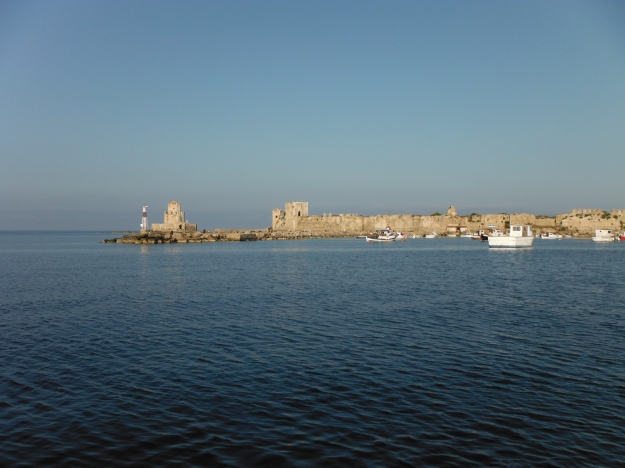 It was a lovely evening, watching the sun go down. As it was getting dark, I saw a shape appear behind the boat, but there was no fin visible so I wasn’t sure what it was. A couple of minutes later, it reappeared about 200m away and stuck it’s head out for about 10 seconds. It was clearly a Monk Seal and we were really lucky to see it, as they are extremely rare.
We went ashore early the next morning, as strong winds were forecast for the afternoon. We wanted to show Sandra the Venetian fort as we had been so impressed by it the week before. Luckily Sandra also enjoyed wandering around and our wildlife luck held as we saw a Kestrel and a tortoise (as well as a feral cat with a large rat!) and lots of flowers, though some had gone to seed.
As predicted, the wind got up all afternoon as we sailed, under genoa only, to Finakounda. Sundance was in ahead of us and we anchored in a big swell and strong wind. It’s good holding there so no worries, but it meant we could not go ashore! The windsurfers were enjoying the F4-5 winds, whizzing past the boats as we were coming in.
As we were confined to the boat, it was a good time to initiate Sandra to the card game Canasta. She had never played it before but she was a quick learner and quickly amassed the points. The wind had dropped by about 8pm so we had a peaceful night.
We headed back to Kalamata on the Thursday with a poor forecast for the next few days. Storm clouds loomed ominously and thunder rumbled but luckily the storm passed us by.

So we decided to hire a car for the next 2 days to explore some ancient sites inland.
Our first trip was to the ancient city of Messini (named after the district). It lies just about 30 km from Kalamata, on the rolling plain to the north west. We stopped for a coffee at a little Taverna in the town which overlooked the site and gave a great view. 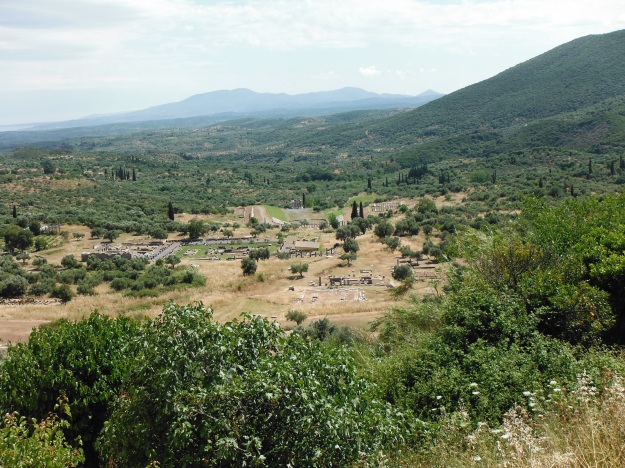 Looking down on ancient Messini

Our first stop was further along the road where there was a massive circular gate which was once in the city walls of Messini on the main highway to ancient Arcadia.

The main site itself was very extensive, with a small Greek theatre, a large stade which had been altered by the Romans to include a curved end, various temples and mausoleums and water features (now dry). 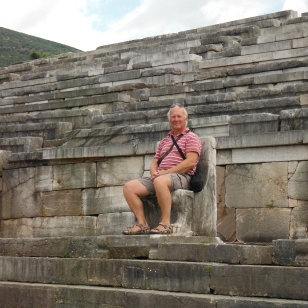 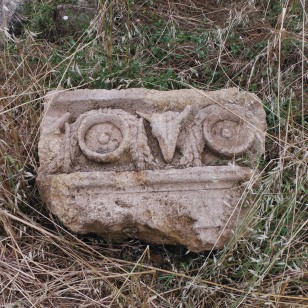 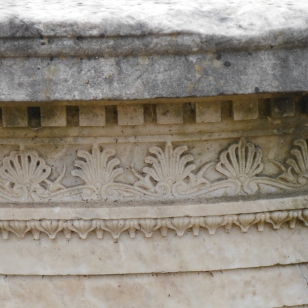 There were also some lovely mosaics, fairly heavily restored. 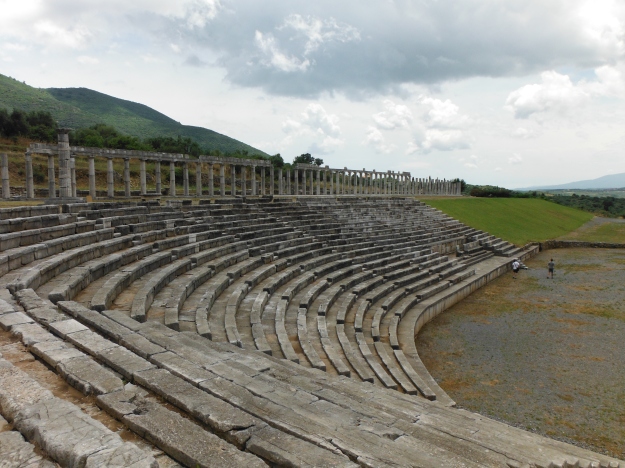 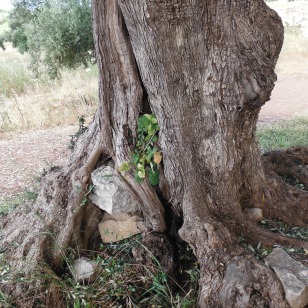 A lot of Roman additions had been made to the original Greek buildings, but overall you got a great flavour of a bustling city. The ancient city of Messini was established in 371 BC after the Messinians defeated the Spartans who had ruled them for nearly 350 years. Many Messinians fled west at this time, many settling in Sicily and giving their name to the straights of Messina between Sicily and Italy. Refugee migrations are not new either!
The next day we drove east over the imposing Taigetos mountains which rear up to over 8000 feet. The road was amazing, with deep gorges and several mountain passes, the highest of which was 8ooo feet. The road was in good condition, with plenty of crash barriers, so not as dodgy as some of the roads we’ve been on in other parts of Greece or in Sardinia! 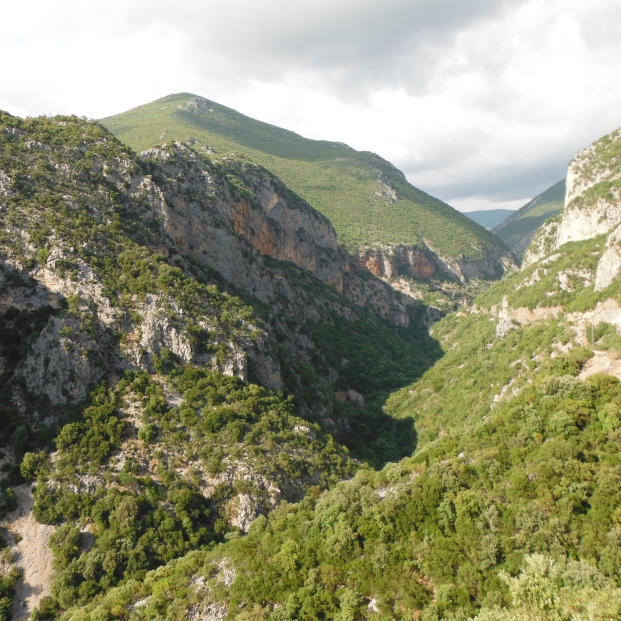 Mountain gorge on the way to Mystras 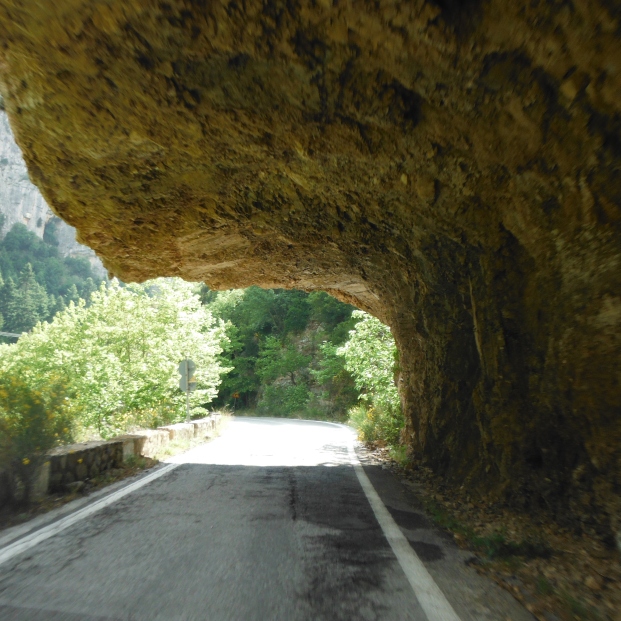 We arrived at the site of Mystras and stopped for a coffee at a “Bistrot ” with a view of the castle, which we named ‘the Eagles Nest ‘ (we even saw an eagle cruising the thermals).

Mystras was a Byzantine settlement, dating back to 1262 AD. The hill it cascades down was filled with mansions and houses, palaces and many churches, all built in the Byzantine style with colourful clay tile designs and pan tiled roofs. It is a UNESCO world heritage site and is being restored extensively. The city was protected by the castle at the top of the hill and two sets of walls running right round the residential areas. Apparently even in those days there were planning disputes as people did not want to live so close each other. The governor, however, laid the law down and basically told them they would just have to put up with it, as space was so limited on the hillside. Things don’t change that much sometimes, do they? Of course, only the rich people could afford to live inside the walls, everyone else had to slum it outside! 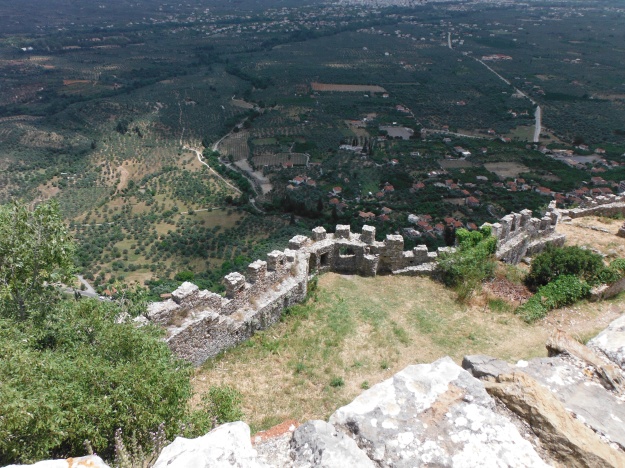 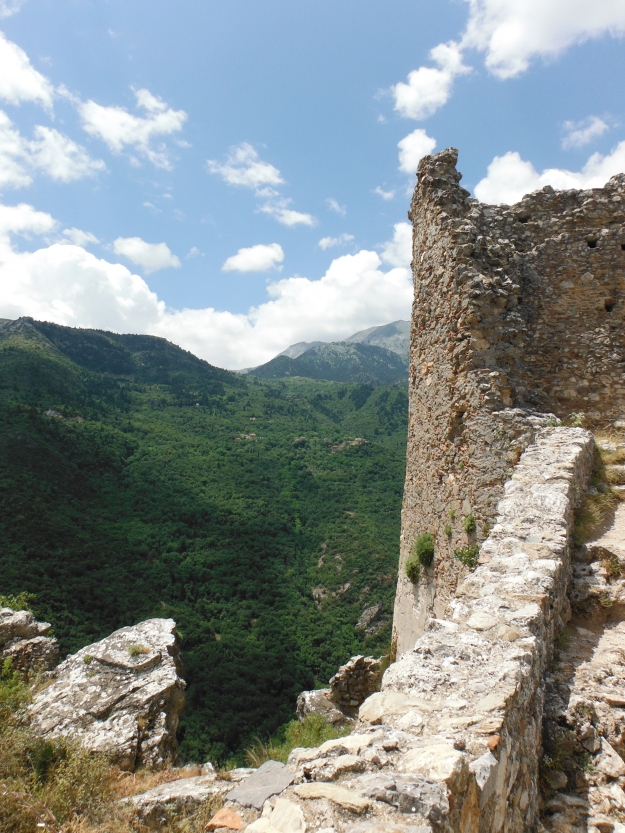 Mystras, looking up at the castle

We walked up and down hundreds of steps and sampled the many churches with some beautiful frescoes inside. 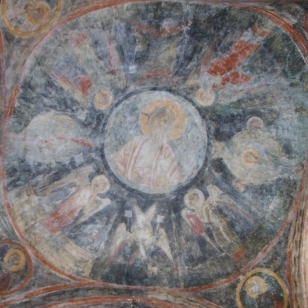 The biggest buildings were in the “Palace of the Despots” but these were still under reconstruction so we weren’t able to go in.

It was an amazing place though and we were pretty tired by the time we had covered the upper and the the lower levels. There were also great views to Sparta, which is a substantial town these days.

Two headed eagle, the symbol of the Byzantine Empire 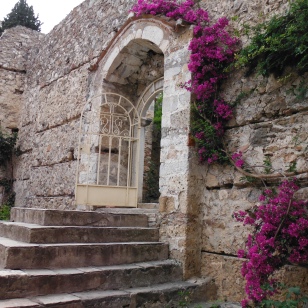 Now we are getting ready to leave Kalamata. Sandra left yesterday in a horrendous thunderstorm and we have done the round of washing and shopping today. Thank goodness for the tumble drier in the marina. The weather is much better today and at last the forecast is improving and the high winds are dropping. So, all being well, we will be off tomorrow to round the next two capes of the Peloponnese. it will be good to be sailing into new territory again.

Looking down on Kalamata