Here we are in Sami, Kefalonia, sitting in a thunderstorm and heavy rain at 10am. Some windows and hatches are leaking and it’s miserable weather. 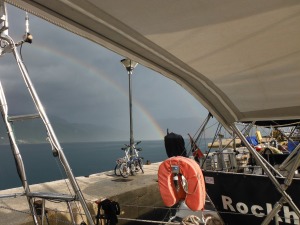 Brief respite from the rain, Sami

Our friends Trina and Joe left yesterday to go back home to Scotland, just in the nick of time. We had a wonderful week’s cruising with them and a couple of days ashore exploring the north part of Kefalonia. 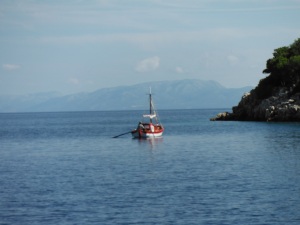 We met them on the town quay at Sami where we arrived after an 8 hour motor from Messalonghi on the mainland. It was great to see them. They were staying in a lovely apartment just outside Sami, so we enjoyed their pool and home comforts before setting off on our week’s cruise.

Our first cruise stop was Agios Efemia, just a few miles away on the other side of the bay from Sami. The harbour master took our lines and there was also power and water on the quayside. An added bonus was the lovely clear water and hundreds of fish in the sea just outside the town. We all enjoyed the snorkeling and Trina and Joe loved being able to stay in the water as long as they liked, unlike Scotland!

Trina and I had a swim and snorkel before breakfast the next day, joining the gang of local, mature ladies who meet for a blether and a swim off the beach every day. We saw at least 6 or 7 fish species, pink soft corals and spiny black sea urchins. After breakfast we set off for our sail to Ithaka, which is considered to be Odysseus’s island in Homer’s epic poem. It’s a wild island on the west coast which faces Kefalonia, but has some charming towns and woodland on the east coast.

We anchored in a small cove for lunch and more snorkeling amongst the shoals of saddled sea bream, so it was late afternoon before we reached Kioni. Predictably, the wind was gusting 12-15 knots as we searched for a space on the busy quay. It was really full but there was just one small space between a big catamaran and a 42 foot yacht. Andy went for it and luckily it was not just two of us on board, as the big yacht’s dinghy was doing its best to fill the gap. Joe heroically managed to move the dinghy by climbing on to the neighbouring, unoccupied yacht and heaving the dinghy on to the dockside. Andy reversed quickly into the gap to stop the wind blowing us sideways, while I handled the anchor. It was all a bit fraught! The guys on the cat were also helpful (self preservation) but had the good grace to admit that Andy had done a great job getting us into a tight space.

So there was relief all round to be safely in the harbour and we could enjoy exploring the wee town. Like a lot of the island towns, Kioni is built upwards on the slopes surrounding the sea. The houses are piled on top of each other, with winding closes and flowers spilling over garden walls and steps.

Our dinner stop was at a delightful restaurant which was vertically arranged on terracing, with only one or two tables on each terrace. The views were over the harbour, with its myriad twinkling lights, all seen through the branches of old olive trees. The waiters were kept fit by constantly going up and down the steps to serve us lucky people.

Trina and I managed a swim off the rocks the next morning before we headed off to our next  destination, Spilia on the island of Meganissi. We were away by 11am, to avoid the ferry that uses the pier we were docked on. A mixture of sailing and motoring covered the 18 nautical miles and we arrived at 1530, which meant it was not too busy. 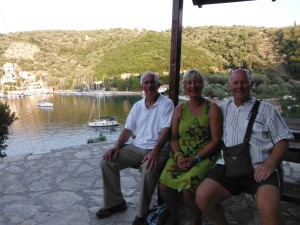 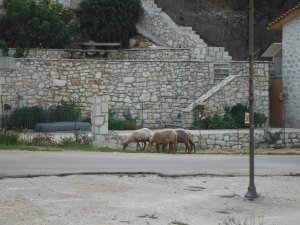 The owners of the Spilia Taverna have laid lazy lines so there was no need to deploy the anchor this time. We really appreciate now why they are called “lazy lines” as it does make life much easier! The owners also provide toilets, showers and even a washing machine. Naturally, they expect you to eat at their Taverna, but that’s not a great hardship.

The only slight downside was that the owners, waiters etc of this particular Taverna are not very cheerful, unlike most of the other Greek people we have met. This has led to the taverna owners being known as “the Brothers Grim” in boating circles. The Greek election took place while we were in Spilia (the 5th one in 6 years). The Greek  people here seem resigned that not much will change, although in the Ionian islands there are still plenty of tourists. Long term cruisers here are also commenting on how busy it has been this September with flotillas and charters, as if people were leaving it late to book to see what would happen.

The forecast for the next evening was for wind and thunderstorms, so we headed for the safety of Levkas marina.

It was only a short 12 mile hop and we were berthed by 1500. One of the pubs at the marina was showing the rugby world cup games so we enjoyed watching a couple of games, especially the exciting  All Blacks v Argentina match. The reported wind did not materialise until about 9pm, so we managed a BBQ on the Magma, and then watched the sheet lightening display turning the whole sky purple for about 2-3 hours. Luckily, the wind did not last all night, so we managed a fairly undisturbed sleep.

The next morning we awoke to a “dreich” day. Reading, coffees, a walk into town….lazy, lazy. Glad to be in the marina and planning the return trip to Kefalonia, as Trina and Joe were flying off 3 days later.

We left Levkas on Tuesday 22nd September and even managed some good sailing on the way back to Ithaka. This time we stopped in Vathi (“big Vathi” to distinguish it from ” little Vathi” in Meganissi).

It’s a beautiful big bay with the town lying all the way round. It’s very sheltered, as it’s a deep indentation off another bay, reminiscent of some fjords.On the way in to the bay on the point, there is a beautiful white chapel with a blue door, just the sort of thing you associate with Greece. 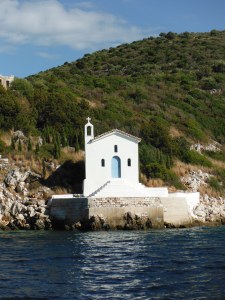 We tied up in the old harbour and Trina and I watched the sunset from a perch above the entrance to the bay, where the Venetians had a gun emplacement. The huge canons, emblazoned with the winged lion of Venice, were still there (well who would steal several tons of cannon from a tiny island in the Ionian?).

Everywhere here people are enterprising,  even bringing water tankers and fuel tankers to the pier.

Later, we had what was probably  the best meal of this year, at a table right by the sea, overlooking the lights of the town.

We sailed past the island of Skorpios which was once owned by the Onassis family and is now in the hands of a Russian female oligarch. Unfortunately there are signs all over the island to say that approach and anchoring are prohibited and the best bays are buoyed off. A few sunsail yachts had managed to squeeze into one of the few permitted anchorages.

All too soon it was back to Kefalonia, but we arrived late (1645 hours) and the town quay was pretty full. When we tried to reverse into a space we were told that they were booked for a flotilla. This was the first time we had not been able to get in somewhere, but luckily in Agios Efemia there is room to anchor and the holding is good, so we had our first night at anchor for a while. Entertainment was watching the dire attempts by boats to reverse into spaces and to anchor. Everyone has to learn, but some of the big boats had the worst techniques despite bow thrusters and lots of hands on deck. We were very glad not to be an the town quay, as the music and raucous singing went on until 4am!

Trina and Joe left the next morning.

We had not managed to show them any dolphins on their week’s cruise but we did get a loggerhead turtle swimming right past the boat in the morning.

They will just have to come back next year for the dolphins.

Tomorrow we head back to Messalonghi to tidy the boat up, do lots of washing and cleaning, inside and out and generally shutting the boat up for winter.

It’s been a fantastic year despite a major scare in Corfu. We have sailed 1700 miles this year. We started in Sardinia and have visited Corsica, Elba, Italy, the Pontine islands, the Aeolian islands, Siciliy, Erikoussa, the Ionian islands of Corfu, Levkas, Kefalonia, Meganissi and Kalamos and the Greek mainland. The highlights for us have been the amazing Aeolian islands with their volcanoes and mud pools and all the Roman remains at Ostia,  Rome and Pompei. We have certainly fallen in love with the Ionian islands and the Greek people and are looking forward to spending our next summer in this area with lots of visitors (as we have taken an annual contract out at Messalonghi).