The gulf of Amvraki lies east of Preveza and is about 20 miles long and 10 miles wide, with only a narrow entrance to the rest of the Ionian sea at Preveza. The water is not clear but green due to the muddy bottom and plankton and the whole area abounds in wildlife. We spent 3 nights at various anchorages, enjoying the peace and quiet and wildlife watching. The edges of the lagoon are very shallow with lots of smaller lagoons behind sandbanks, making it a wetland paradise. 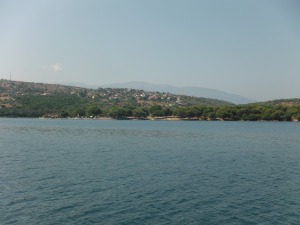 We saw flamingoes flying over, loggerhead turtles watching us watching them, pelicans laboriously flying just above the water, dragonflies, swallows, seagulls, terns,egrets, herons and dolphins. We stayed sitting on deck for hours the first night listening to the shepherd calling his jangling flock,  while he walked along the shore with his torch. Two tiny fishing boats had laid their nets just behind us and the fishermen talked in low voices with the quiet strains of the radio behind them, while they waited for the nets to fill. 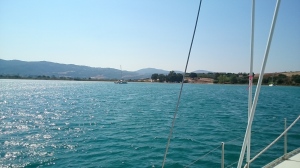 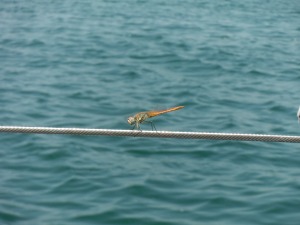 It was a magical place and so reminiscent of the west coast of Scotland. Some small scale agriculture, fishing, green hills and stunning mountains in the distance. I swam first thing in the morning and was rinsing off the seawater on the back platform when a pod of dolphins swam into the bay. A mother and young calf came to within 50m of the boat!

We saw more of the dolphins over the next few days. I logged the sightings with the local dolphin project and was amazed to read that there is a resident population of 150 bottle-nosed dolphins in the gulf.

The only downside to being in the gulf was the relentless wind which blew at 20 knots all afternoon, making an uncomfortable anchorage. It’s a wonderful place though and we will return another year to explore further.

We returned to Preveza and Andy managed to get a dental appointment to get his crown stuck back in. He got an appointment the next day and it only cost €20. The dentist spoke excellent English and is seriously contemplating going in for dental tourism in partnership with local hotels, as dental treatment is so much cheaper in Greece than Britain. 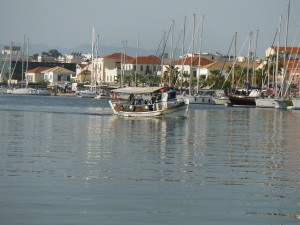 Our next port of call was Levkas marina just south of Preveza. In this part of Greece there are many shallow lagoons and sandspits and often the access to towns is via dredged canal with a road on the banks. Levkas canal is one of these and is dredged to about 6m,  but the entrance has a nasty hooked sandbar and a swing bridge which opens only once an hour for 10 minutes or so.Dredgers work constantly to keep the channel clear. So it’s a logistical puzzle to get to the entrance of the canal just before the bridge opens. It’s a busy place and you don’t want to have to hang around inside the canal entrance waiting on the bridge to open. 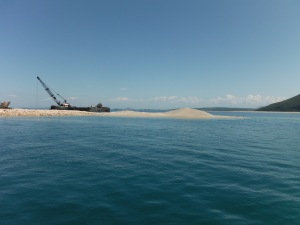 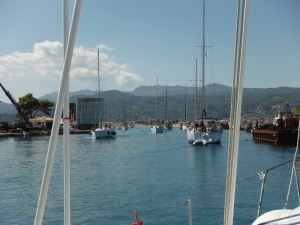 We arrived with a few minutes to spare and proceeded through the canal along with about 10 other yachts. Quite a few were coming the other way too. Levkas marina is one of the few big marinas in the Ionian, owned by the same group as Gouvia. All mod cons and every available service but it can be noisy. We wanted to see what it was like. Unfortunately,  we ended up on what felt like  the British “party pontoon”: a boat that had clearly not been out for months with a crowd of smokers on one side and noisy neighbours further down who kept us awake till the small hours with raucous laughter!! We prefer quieter places. Levkas town itself is very quirky as quite a few of the old houses are made of corrugated iron or tin, because of the earthquake risk in this part of the world. 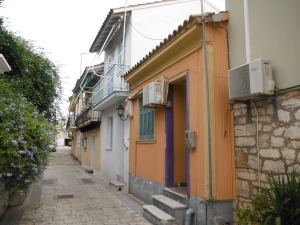 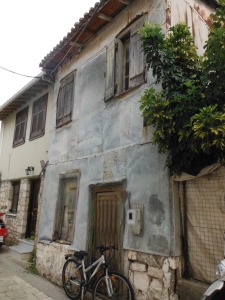 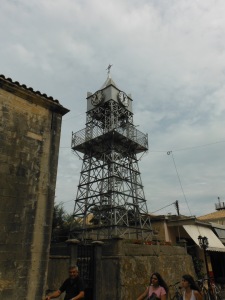 Luckily on the next night the weather intervened and stopped the outdoor merriment. Winds gusted to 25 knots, thunder and lightning joined in and torrential rain fell. Everyone was up at 3am to check and adjust mooring lines. Although the wind dropped the next day, more rain fell and it was strange sitting inside the cabin again (just like sailing at home) and watching a film!

The weather cleared after 2 days and we headed off to the island of Kalamos, south of Levkas.  It was a convenient stopping place to break our journey to Messalonghi on mainland Greece. As luck would have it, our neighbour’s daughter and partner were on their boat in Kalamos, so we arranged to meet them there. Leaving the Levkas canal on the south side was like suddenly coming across West Highland week in Scotland. There were so many sailing boats, which made a lovely sight. Luckily in this part of the world there are also lots of harbours, but it meant that they would be really busy. 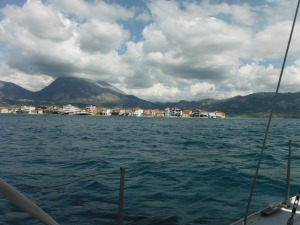 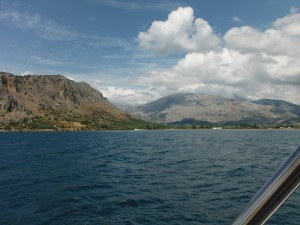 The inland ionian, a bit like Scotland but much warmer!!

Getting into Kalamos harbour was our first experience of coming stern to on to a quayside using the bow anchor to  hold us in place (no lazy lines in most of the small harbours). The technique is to drop the anchor about 4 boat lengths from the quay where you want to berth, then reverse the boat while paying out the anchor chain. When you want to stop ie before you hit the quayside,  you stop the anchor chain going out and you hope that you have enough chain in the locker!!!  Sounds easy doesn’t it? Unfortunately with wind blowing and lots of other boats, it’s far from easy, but we managed OK. Another Mediterranean sailing milestone!! After us, more and more boats appeared and three flotillas rafted up. The harbour was nearly full, although apparently Geoge, who is the unofficial keeper of this harbour, has never turned a boat away. 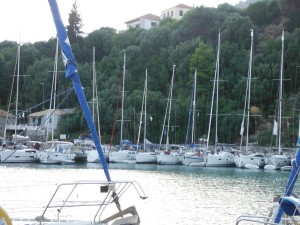 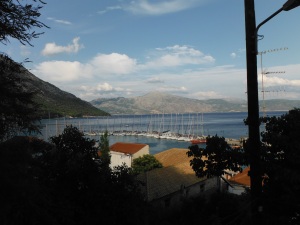 Lynne and Keith have sailed these waters for more than 20 years and know everyone and all the good places. It was wonderful to pick their brains and get some inside info. We had a lovely evening together, eating at George’s Taverna and swopping stories. I am sure we will meet up with Lynne and Keith again next year.

We were bound for Messalonghi the next morning and as it’s 40 miles (8hours) we wanted a reasonably early start. Big mistake! A boat going out before us caught a neighbours anchor chain and it was with a feeling of inevitability that we started to pull in our anchor. As predicted, we had another chain across it, but Andy managed to free us speedily with our clever “anchor thief hook” which we had only just bought in Levkas. Serendipity strikes again.

Lesson learned, come in early, leave late!! Unfortunately not always possible. Have your anchor thief on stand by.

So now we are in Messalonghi marina for a quick look and finalisation of our annual contract. A lovely sail over from Kalamos, Vaila romping along at 7.3 knots on a broad reach in 15-20 knot winds. Lovely to get a proper sail at last and hardly any other boats in sight. There was another canal entrance to this marina but much nicer than Levkas, with coloured houses and landing stages on the canal banks. 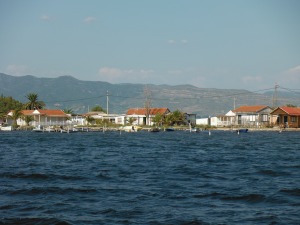 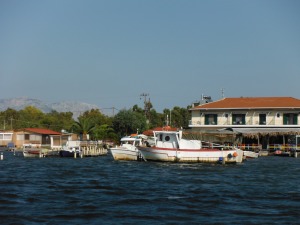 On Tuesday we head back across to Kefalonia, to meet up with our friends Trina and Joe and sail for a week. Hopefully the weather will be kind and let us get to the beautiful places in Kefalonia and Ithaca.