No damage to keel or rudder

Vaila back in the water and ready to go

At last we got away from Gouvia marina. Although everyone there had been amazingly helpful and kind, after 2 weeks on the hard we were more than ready to get back into the water, marinaitis had set in!!

Back in the water, Gouvia, Corfu

We had made the most of our enforced break ashore though and hired a car for a few days to explore the wild NE part of Corfu. We stayed in a beautiful apartment overlooking the sea, with a lovely swimming pool and quiet balcony. We had lunch at the “White House” in Kalami, where Lawrence and Nancy Durrell lived in the 1930s. His younger brother Gerald and the rest of the family also lived in Corfu at that time. 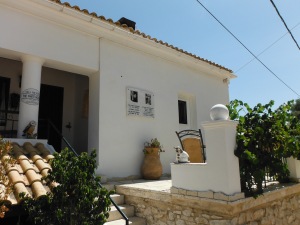 Some of the interior roads were merely dirt tracks through olive groves but with stunning views of mountains and the sea  far below. The castle of Angelokastro seemed to hang over the sea, accessible only by hundreds of steps.

Olive groves getting ready for harvest 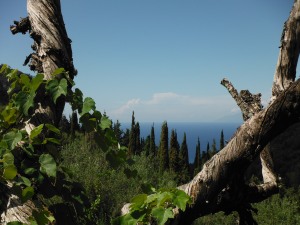 Our first “sail” was only about half a mile to just outside the marina. We did not want to go far until we were confident of the engine. All was well though and after a night at anchor, we left for the island of Paxos, about 25 miles south of Gouvia. We had a great sail to Paxos with the wind getting up in the afternoon. We had opted to anchor in Lakka on the northern tip of Paxos. It’s sheltered from the prevailing NW winds and less noisy than Gaios the main town. When we got there though it was very crowded and it was quite tricky to find a good spot to anchor. Unfortunately the wind was also more northerly than NW,  which sent a swell in to the anchorage and a strange current meant that boats were lying in all sorts of directions and getting too close to each other. We stayed on deck watching the anchor dance and feeling uncomfortable.  There was nowhere else to go. Usually the wind drops when the sun goes down and this evening was no exception, but the crazy swinging got worse with no wind. So by 10 pm, in the dark, we decided we needed to move. We managed to find a spot in the very entrance of the bay, dropped the anchor and settled down to sleep, well away from other boats and risks of collisions. We awoke in the morning to find another boat even further out than us. Luckily the wind had not got up in the night.

A lot of boats left in the morning, so we moved further into the bay and went ashore. Lakka is a delightful wee town with limestone houses and little tavernas round the quayside. There are touristy shops but also ordinary houses and lovely old fashioned shops. We stopped for an ice-cream and it’s not every day you sit at a table next to an orthodox priest having his coffee! 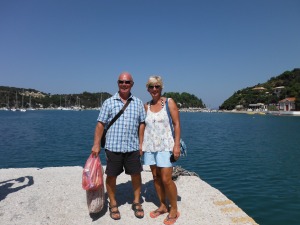 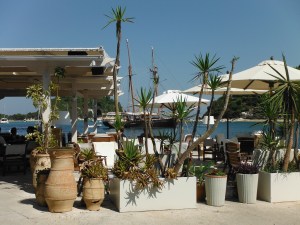 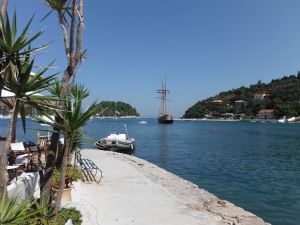 We enjoyed the peace and quiet and the swimming in the crystal clear water in Lakka bay, but it was time to move on the next day. We motored down the west coast of Paxos , with its spectacular limestone cliffs and caves and without the tourist developments of the east coast.

We had a quick visit from 2 bottle-nosed dolphins and saw lots of flying fish (one was only about 5cm across but sparkled in the sun which allowed us to see it). Our destination was Preveza marina and it was lovely when our friends Alison and Tony from “Reveller ” were on the quayside to take our lines. The marina staff had stopped work at 3 pm and it was about 5pm when we arrived and the wind was blowing the usual15 knots making it tricky even with help.

We have had a lovely couple of days in Preveza catching up with Alison and Tony who we first met in Tropea in southern Italy. We are now off for a few days to explore the gulf of Amvraki.