Our last stop on the Italian mainland before Sicily was Scilla. This tiny place is just before the Messina straight, so was a good place to stop. Anchoring is impossible here as the bottom is all rock and old moorings, so you have to pick up a buoy. The town is vertically built on the cliff, with a castle on the headland. The owners of the buoys laid on a water taxi service to get ashore so it meant we did not have to get our dinghy out. 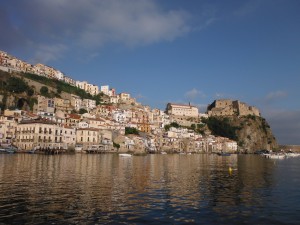 Scilla from our buoy

The town is very touristy at sea level, with lots of restaurants and tourist shops, but it is lovely, with fishing boats winched up in the evening and little alleyways down to the sea. A typical fishing community as in so many places, like Fife, but in Scilla the fishing is still thriving. 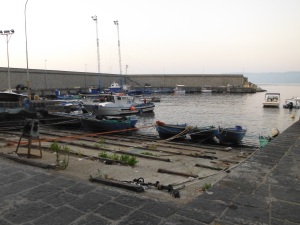 One of the main fish caught is swordfish and we were lucky to get a close up view of a couple of the boats as they were in the harbour. They are quite small, with a crows nest at the top of the mast. The captain sits here, can spot the fish near the surface and steer the boat from up there. At the bows is an impossibly long “passerelle”, a ladder like extension where the harpooner stands. It all looks precarious but works. The word passerelle has now been taken over to mean the gang plank used to get ashore from boats moored in harbours in the Mediterranean, but it originally came from the fishing boats.

We had a wonderful meal at one of the restaurants, sitting on the deck outside with candles on, the sea lapping underneath the decking and Vaila about 200 m away on the buoy. It doesn’t get much better. The best sea food risotto ever followed by grilled swordfish (what else), all washed down with Calabrian wine. And it certainly didn’t break the bank as it cost less than a meal at most places in Edinburgh 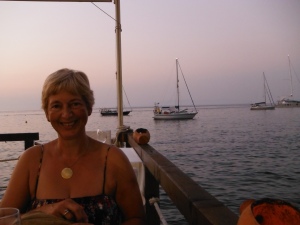 Dinner with Vaila in the background

The next day we headed down the Messina strait. Having read how busy it can be with large ships, we were pleasantly surprised by the lack of big traffic. It’s only 1.5 miles wide at the northern end and the worst thing was the many ferries plying across between mainland and Sicily. Most of them were small car ferries with double ends like there used to be running between many of the Scottish islands. Just round the corner from Scilla are the whirlpools mentioned in the Odyssey. There are also whirlpools on the Sicilan side (Charybdis), again of Odyssey fame. According to the pilot books these are caused by the salinity and temperature change between the Tyrhenian sea, north of Messina and the Ionian Sea south of it. The Ionian sea is more salty and a couple of degrees cooler which sets up a strong current that flows south at the surface and north deeper downl When the current meets underwater rocks it sets up overfalls and whirlpools just like a Corryvrecken in Scotland. We certainly noticed the current and were doing 8.5 knots over the ground for some time (a 4 knot current). 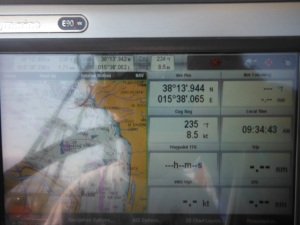 8.5 knots in the Messina Strait!

Apparently the whirlpools are no longer as bad, as an earthquake in 1783 altered the sea bed. However it must have been very tricky for sailing ships with no handy engine. There were rip currents along the coast too and not surprisingly no-one was swimming and boats were all hauled out. 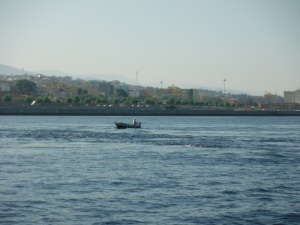 We carried on down the east side of the strait until it got wider and we were away from the ferries going in and out of Reggio,  then crossed over to the Sicilan side. We picked up a bouy just under the town of Taormina, so we could go ashore the next day. The water was crystal clear and no jelly fish, so lovely to get some swimming again.

On the buoy at Taormino

The water taxi was not included in the buoy price this time, so we took the dinghy ashore and caught a bus up to the town on the hilltop. It was the usual hairpin bends with no crash barriers and crazy Italian taxi drivers to be avoided, but apart from  the bus  scraping  along a wall,  we got there safely. The views from the bus made up for the driving!

Taormina itself is a lovely hilltown, like so many in Italy, desperately trying to catch any breeze there is. Mount Etna is in the distance, smoking away. There is a Greek theatre, rebuilt by the Romans, where they regularly stage concerts. A run of Carmen had just finished and Spandau Ballet were setting up. I would love to go to a concert there, maybe one day….

Taormina Greek/Roman theatre with Etna in the background

Back on Vaila it was calm and we decided to anchor that night, further along where some other boats were anchored. The bouy cost €50 per night and we were leaving the next day anyway. We foolishly left the dinghy and outboard on the back as we were not going far the next day and would have time to put it away in the morning. Yes, you guessed, the wind got up during the night and by 8am we were fighting to get the outboard lifted on to the boat and the dinghy on to deck. Just then I noticed a French flagged boat getting very close to our bows and he was obviously dragging his anchor, completely oblivious because he was fishing. By this time his stern was about 5m from our bows and I shouted at him to start his engine as he was dragging. He just carried on fishing!!! I screamed at him and he got the message, but he was on his own so could only motor away dragging his anchor and so the inevitable happened. We hauled our anchor in with his firmly attached. Andy came to try to untangle us while I took the helm and reversed. All this was happening in a force 4 with quite choppy water and now the two boats were only about 3m apart bows on! Luckily Andy got his anchor off, just as an American couple from a nearby catamaran came to offer assistance.  They had seen everything happen and even had photographic evidence in case a collision had happened! Very nice of them to offer to help.

We got out of there pronto and headed for the shelter of Riposto marina.

Etna at night from Riposto

Much to our surprise our French/Italian “friend” arrived several hours later and was put into a berth 2 down. He looked very sheepish and kept looking at our anchor! He obviously couldn’t speak much English as he tried to speak to Andy about our anchor. He certainly didn’t know the word for sorry!

Riposto is a proper working town, right under Etna. There was a great fruit and veg and fish market right across the road from the marina, so lovely fresh stuff for tea. We decided that this would be a good place to pick Sally up on the 23 July as it has a good train connection to Catania airport.

As we still had a week to spare, we decided to sail down to Siracusa, near the SE corner of Sicily. It turned into another longer motor in big swells from the NW, but it was worth it when we dropped anchor in the grand harbour in front of the old town. The old city sits on a peninsula jutting southwards into the sea with the huge natural harbour to the west of it. 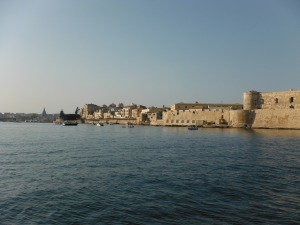 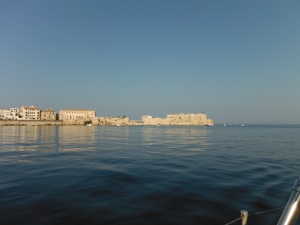 Siracusa was an ancient city state founded in 734 BC, which rivalled Athens and controlled the the western Mediterranean for 200 years. Archimedes lived in the city from 287-212 BC and helped to repel the Roman attack with giant catapults and other fighting machines he designed, however the city was captured and he was killed despite orders to take him alive.

Inside the Duomo, Siracusa

The old city is dominated by the Duomo, a baroque building which incorporates the old Greek temple of Athena. The massive columns of the temple are still visible.

There are lovely, shady, winding alleys and views to the sea. Today there is building work all alongside the waterfront. The Town Quay is being turned into a cruise ship docking area and a new marina is also being constructed.

Tomorrow we are heading back up to Riposto to pick up Andy’s sister Sally on Friday. Sally will sail the next leg to Corfu with us.

1 thought on “Scilla and Sicily”