The pilot book contains dire warnings about the storms that can appear out of nowhere in the Aeolian islands. They are not named after Aeolus, the wind God, for nothing. So when the forecast gave nothing greater than force 2 for the next week, we took our opportunity and sailed across from Tropea. Tropea was like an oven, so we were not sorry to leave this beautiful place.

It was 30 miles across to Stromboli, the most volcanically active of all the islands. It is also known as the lighthouse of the Mediterranean, as it erupts regularly and can be seen from quite a long way away at night, pointing the way to the Messina straight. There is a small volcanic outcrop called Strombolichio, just off the main island. It has sheer cliffs, a lighthouse with hundreds of steps up from the landing place and looks like it has been designed by a computer game designer. 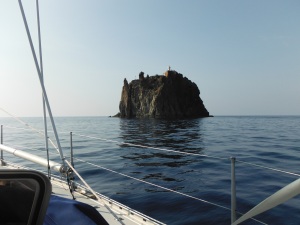 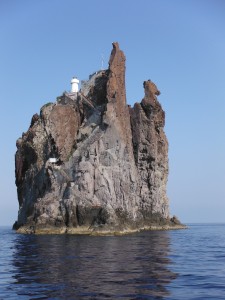 Stromboli itself is very active but has only regular, small eruptions which apparently lets the pressure off and makes it less likely that there will be a huge eruption. Amazing to think that people live on Stromboli, although occasionally they do have to be evacuated for a short time.

We anchored in a big bay on Stromboli’s north east side, with about 40 other boats, including tripper boats which were going to see the eruption at sunset. The crater was shrouded in cloud and smoke, so we decided to wait and to sail past Stromboli at 3am the next morning.

When we left at 3am we were amazed that no other boats were leaving. We motored round to the north west part of the island and were blessed with great views of fountains of magma and molten rocks being shot into the air every 10-15 minutes.

You could even see the magma flow down the upper reaches of the mountain and a couple of times there were loud explosions. As Stromboli is 3000 feet high and we were about a mile offshore it was not dangerous. A couple of bigger boats appeared and passed by but apart from that we were on our own. An awe inspiring sight and not something we will forget.

We left Stromboli in the dawn light about 0530 and headed to Vulcano, another active island in the group. We passed the bigger Isles of LIpari and Panarea on the way. They both have large settlements and lots of ferry traffic.

We anchored in one of the bays on Vulcano and immediately noticed the smell of rotten eggs. Vulcano spews gas not magma. We met a lovely couple Mike and Grace, from Canada, who came over for a drink bringing charts of Greece and Turkey for us. They have been cruising in the Med for the last 10 years and they were now on the return journey to the Great Lakes.

After a lovely, sociable evening the night became a bit of a nightmare. What little wind there had been dropped, but a big swell came in, rolling Vaila horribly. By first light there were big waves crashing on the rocks and we had to leave. Luckily there was another anchorage just round the corner which did not get the swell and we managed to pick up a mooring buoy for €30 per night. Nice to be secure.

Outside the mud pools 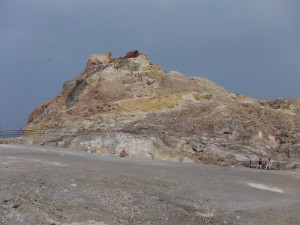 Amazing colours of rocks at the mud pools

The day could only get better! Brunch at 11am, a walk into town to an amazingly well-stocked supermarket followed by a hot mud pool experience for me. Andy did not think much of my idea!! The mud is meant to have therapeutic properties. For €2 you could cover yourself in mud that was so hot you could hardly touch it, stinks of sulphur and then you come out looking like an alien!! It was completely bizarre watching all these grey/green coloured people sitting on the rocks,  luckily I could not see myself!! A shower got rid of the mud from my skin which felt lovely, but my bikini will never be the same again, sadly. A cool drink was definitely required after that.

We were up at 6am the next morning for a walk up to the crater, via the town. This volcano is only 1000 feet high and has no magma, just sulphur dioxide fumeroles. There is a big sign at the bottom warning of the fumes but thankfully no health and safety people stopping you going up.

At the bottom of the volcano

Up the ash cone

The walk up was on volcanic ash and later hardened mud with dust like talcum powder on top. It was very hot and there were just a few families also mad enough to go up so early. I am glad we did it then, as we got lovely views back down to the anchorage and it would have just got hotter as the day progressed.

View to the anchorage, Vulcano

We were at the crater by 8am and it was really surreal watching the greeny yellow fumes creeping out of holes and over the ridge. The smell was strong but not as bad as the mud pools. Sulphur “flowers” covered the rocks. The crater was clearly visible too.

We had another of those coincidences in the evening. A big New Zealand boat was parked next to us and we were invited for drinks. Two of the guys were virologists who had set up an Austrian biotechnology company and knew Intercell (the Austrian company I worked for) and some of the people. You couldn’t make it up could you!

We had a peaceful nights sleep, thank goodness and headed up the west coast of LIpari the next day to see the beautiful coastal scenery of impressive stacks, arches and coloured rocks.

These islands attract a lot of tourists and we had to continously dodge ferries and fast hydrofoils coming away from Vulcano. We anchored for our last night in the Aeolian islands off Panarea. It’s known as a party island but we were well away from the dance music and enjoyed some lovely swimming followed by fresh sword fish steaks done to perfection on the aptly named Magma BBQ.