When we left Salerno we cruised down the Calabrian coast of Italy. This is a beautiful, wild corner of Italy, not yet on most tourist itineraries. The Appenine mountains are in the background making for an interesting coast.

There was often a good sea breeze blowing from the west by 10am sonde managed to sail most of the time in the first few days. We had one very lucky escape as we just managed to dodge a floating hawser about 10 cm thick and many metres long south of Salerno.

There are few good anchorages but we managed to find a lovely spot just round Punta Palinuro about 40 miles south of Salerno.

There were a few other yachts anchored but no large power boats or jet skiers. This coast has proved a lot quieter than further north and we often don’t see another boat all day.

The next three nights we spent in Maratea marina. It’s very small and tricky to get into but it’s a delightful town. It’s overlooked by a huge statue of Christ on the mountain above. 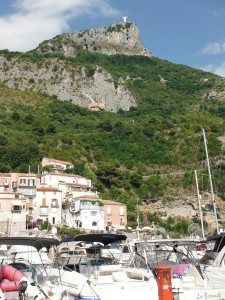 Maratea harbour from the top of the town

It was primarily a safe fishing harbour for centuries, but now the pleasure boats predominate. The town nestles at the bottom of the mountain and is in the shade for the first few hours of daylight, which was lovely, as it was extremely hot during the day. We stocked up with food, walked up lots of steps round the town, sampled the ice cream and had a lovely meal on the “blue moon” evening, 1 July. We also had a great view of the Jupiter and Venus conjunction. Unfortunately, the biting insects also had a great view of our legs and just for once Andy came off worse than me!

I braved the Italian postal system again to send some postcards. The wee post office only opened on Mondays, Wednesdays and Fridays,  0830 to 1230. By 8am on the Friday there was already a queue. I only wanted 3 stamps. It was obviously pension day judging by the age of the queuers. Just my luck. The first pension payment took 15 minutes and with the prospect of 6 more people in front of me , I waved my 3 postcards and said” tres francoboli” and the kind postmistress took pity on me! We eventually got away at 0930.

South of Maratea, the mountains turn into hills and there are miles of beaches with resorts. There must be thousands of beach umbrellas, all in colour coded, sections along this coast. It did not seem busy but by August it will probably be full of Italian holiday makers. Our next stop was Cetraro marina.

We ended up here for 2 nights, shopping and washing. There was a washing machine in the marina, bliss! We also ended up with another Moody next to us, owned by a lovely Italian couple. This is the first other Moody we have seen for ages.

I was intrigued by the little flashing lights near the harbour wall. It turned out they were on top of the pot buoy flags on the small fishing boats. The fisher folk appear to be much more considerate round here if they put lights on the buoys. A few times on night passages in the last couple of years we have had lucky escapes from buoys in the dark!

The next stage was a 50 mile stretch to Tropea. There are no harbours suitable for anything than tiny boats on this stretch of coast and there are sandbanks close to shore. There was no wind so we had to motor all the way. The only highlights were Andy seeing a turtle and me seeing a blow up child’s swimming ring with an animal head on. Luckily no child was attached as we were 10 miles offshore.

Tropea is a large town that sits on impressive ramparts and sandstone cliffs. The harbour has a tricky entrance but once inside it’s really sheltered. So sheltered in fact that it was boiling hot! We climbed the 200 steps up into the town a couple of times, early or late to avoid the worst of the heat.

Looking up at Tropea town

We met some of the same yachts from Maratea. Everyone is making for the Aeolian/LIpari islands as the forecast is really good. This is Odysseus country (Ulysses in the roman version). 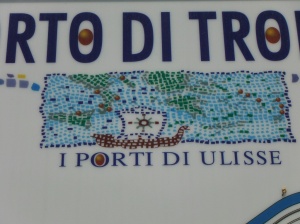 The legend goes that the straights of Messina were guarded by Scilla and Caribdys,  2 whirlpools and the legend goes he also saw Stromboli. Luckily the whirlpools are no longer so bad as an earthquake last century altered the sea floor, but there is still quite a current in the straights of Messina which is unusual in the Mediterranean which has virtually no tides. We don’t need to worry about that yet though.

We are now in the Aeolian islands and despite the settled forecast it’s pretty windy today and we had to make a sharp exit from our anchorage. More about these amazing volcanic islands in the next post.