We had a great week cruising up the east coast of Corsica. A week is hardly enough time to do the island justice, but the west coast is fairly tricky especially when the NW mistral still blows frequently.  It’s a very mountainous island and even though the east coast has a flat coastal strip, the mountains still dominate. 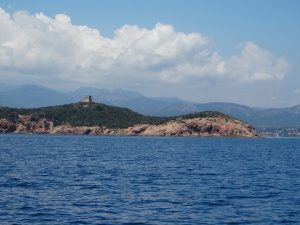 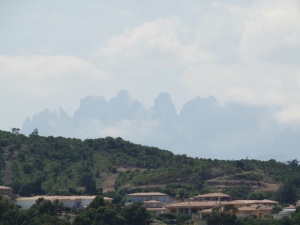 It was very strange getting our ears attuned to French after weeks of Italian. Our Italian is poor but we got very muddled when answering French questions and would often say “si ” instead of “oui “. The worst brain storm was me asking a girl “parlez vous Francais ” instead of “Anglais”, she was very amused, so was Andy!!

We worked our way up the east coast staying mostly in marinas. The one we liked best was in Solenzara. It was a lovely, wee town. Geared up for tourists but clean and tidy and no high rise developments. We found Corsica more expensive than Sardinia and we had our most expensivevice cream there €9 for two scoops each!!

All the Corsican French people were very friendly and helpful and more interestied in us than the Sardinian were. We arrived in Bastia, the northern capital on a Friday. The place was buzzing and it’s a big city so it was noisy in the marina. We opted for Port Toga marina as it was cheaper and meant to be less prone to swell. The down side was that there was loud music at night from the clubs. Ear plugs again required! 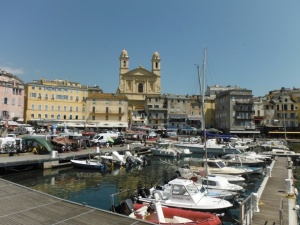 We walked into the city on Saturday to explexploreore.

Rally cars were setting off from the main square on the north- south Corsica rally. 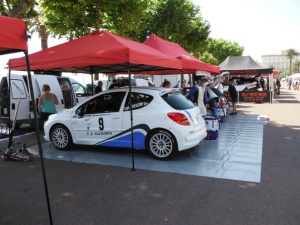 There were loads of mountain stages as most of Corsica is mountainous, so we were  sure it would be exciting driving.

In the old port canoeists were getting ready on the first stage of a week long adventure course called “Corsica Raid”. The first stage was a 9km canoe followed by runs, abseiling, swimming, mountain biking, canyoneering etc. All sorts of teams were taking part with back up vehicles and sponsors logos. All very colourful and exciting.

After that it was a real let down to go to the supermarket, but it did not open on sundays so we had to stock up. 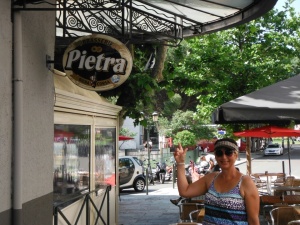 My kind of beer!! Shame I can’t drink it.

Another loud night at the marina, so ear plugs were essential as we had to get up early on Sunday to catch the 0906 train to Corte. 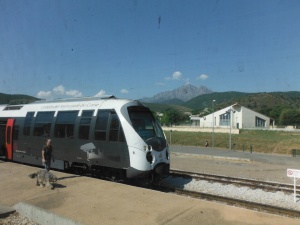 It was a lovely 2 hour train journey, winding up from the coastal plain into the dramatic granite mountains into the centre of the island. Everywhere was very green and lush as they get lots of rain in the winter and lots of snow in the mountains. There were still a few patches of snow visible on the highest peaks (8000 feet).  A long distance footpath, the GR20 traverses the mountains for about 180 Km with 10000m of up and down. It usually takes about 15 days to complete. We both decided that we are too old for that now as you have to carry all your own stuff!!

The town of Corte was lovely. 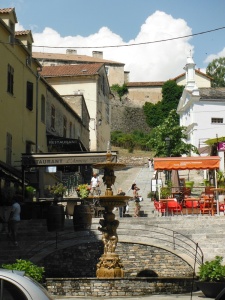 It’s a university town with a lovely old part and an impressive fortress on the hill called the Eagles Nest, so of course we had to go up there. 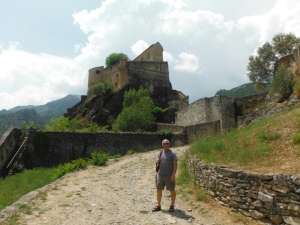 The entrance was via a great wee museum, which was very informative about the hard lives of the Corsican people in the old days. They lived mostly away from the east coast due to the malaria in the swampy low lands and the bandit attacks from the sea. They scraped an existence on poor land, kept pigs and harvested chestnuts to make into flour. Later they also produced charcoal and smelted iron ore that came from Elba.

The fortress itself was very low key but maintained and had great views over the mountains. We had lunch in a restaurant sitting high on the hill. Unfortunately the weather turned and we had a thunderstorm. We had not brought any rain jackets, as you get so used to never having rain, but the mountains get a daily thunderstorm in the summer apparently. That’s why everything stays so green! 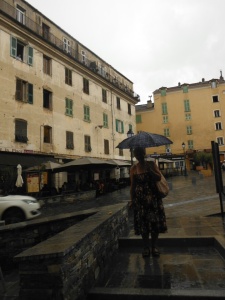 We motored over to Elba as there was little wind and it was dead against us. Quite a lot of shipping so good for practicing our radar. Three dolphins came to have a quick look but didn’t stay. We were obviously not going quick enough for them! We anchored in a great spot, in fact the only spot of sand in the whole rocky bay, so we were completely on our own that night, which made a lovely change.

The following night we were just round the corner from Porto Azzuro at the east end of Elba. We anchored off the beach along with another few boats. An older italian man snorkeled up to our boat and told us there were barracuda and big shoals of fish just beside us so we quickly got snorkeling gear on and jumped in. There were certainly a large number of fish and some could have been small barracuda as they were about 1m long. As he was local, he seemed to know. We came out quickly when we sighted the dreaded purple stinger jelly fish!

We did not linger in Elba as the weather forecast was for storms and we did not want to get stuck there. The south coast is also quite industrial with old quarries and derelict machinery so not all that pretty.

So we are now cruising down the west coast of Italy. On the crossing we managed a fair bit of sailing and saw what we assume was a tuna jumping a couple of times, shame we didn’t have a tuna line. We spent the first night in Castiglione della Pescaia, where the harbour was so shallow we touched bottom.

The canal into Castiglione della Pescaia 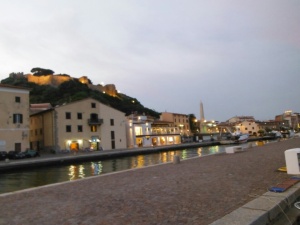 Now at the Monte Argentorio peninsula, North of Rome and near Giglio one of the Toscana islands of Costa Concordia fame. A vast marina and we expected eye watering prices but we are still in the cheap season so only €33 per night!!

The shallows are serenading us here morning and evening.