The last few weeks have flown by. Just before Andy flew off to Malta, I had to have a wisdom tooth removed! The marina were great and arranged an appointment for me at the swish Sardinia Dental Clinic in Olbia. 30 minutes after I got there the offending tooth was out and I was on the way home. I had been in pain since before we left Scotland and two trips to the dentist at home did not diagnose the problem, I  just got antibiotics which made me feel rotten. So it was great not to be in pain any more at last.

Andy had a good trip from Malta via Gozo to Trapani at the west end of Sicily. They all got on well on Weoghi and it’s all systems go for the Atlantic in November.

My friend Sandra arrived on the 15 May from Edinburgh and we spent the 16th exploring Olbia and trying to find the perfect Italian coffee. We wandered round the old town, sampled the museum and had the inevitable gelati. Sandra helped me to get started with some crochet.

Andy got back to Vaila in the evening of the 16th and luckily he did not come back with boat envy, as Weoghi is a beautiful 45 foot Jeanneau!! We managed to christen the new Magma BBQ with some delicious sword fish steaks. We also  checked the weather forecast and planned for a sail on the 18/19 May. Unfortunately that was the only weather window that week, as a big low pressure was sitting over north Italy and the mistral was going to blow strongly starting on Wednesday.

We set off after breakfast on the 18th and motored out of the channel before hoisting the sails. It was a nice breeze but on the nose as ever and we had to put the motor on to get round Capo Figari. Then a lovely sail into Cala di Volpe with a good F4/5 northerly with Sandra enjoying herself at the helm. Joyce and Mike passed us going the other way in Solent Salamander and got a nice photo of Vaila under full sail.

Vaila under full sail, Sandra at the helm.

We dropped anchor in Cala di Volpe just in time for a G+T before dinner. The water was crystal clear as ever, but a strong breeze was blowing so swimming did not seem so attractive and the water was only 16 degrees C!!! (I know, I have gone soft! that sort of temperature would be really warm in Scotland).

We watched the comings and goings from a couple of superyachts anchored further out. Staff taking people ashore to the ridiculously expensive hotel where a suite allegedly costs €25000 a night. The water ski lane was also already in operation with only one or two takers.

We had quite a rocky night but the holding is good in the Cala, so no dragging of the anchor. Andy and I woke a couple of times in the gusts but Sandra had a great sleep. It was still really windy in the morning so we gave the banded sea bream some crumbs and watched the aquarium display. Then we set off after breakfast in a westerly wind which soon changed to southerly and then back to westerly as we came south and then West in towards Olbia!! A good beat into the wind and then we moored bows-to at our berth which has the advantage of being further away from the quayside in the cockpit. This makes it a bit more private.

The next few days were spent touring a bit of Northern Sardinia in the car, as it was far too windy to sail. We even had a thunderstorm and it was unseasonably cool. It was a shame for Sandra, but it meant we saw more of the island. We had a lovely lunch at the hilltop town of Posada and just beat the coach load of tourists to the castle. A quick look at Coda Cavallo beach and view of Tavolara before heading back to Olbia. 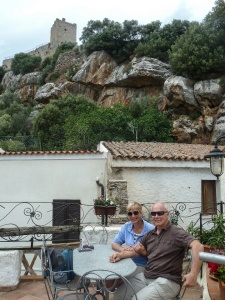 Lunch on the roof terrace

The next day the road to Tempio was stunningly beautiful with its Cork oak forests and strange granite outcrops. We stopped at Palau on the north coast and watched the ferry coming in from Madelena in the crystal clear turquoise water. A quick look at Canigioni marina in a very strong wind then back to Vaila.

Sandra and I at Palau

On Sandra’s last day we actually managed an hour’s sunbathe and the perfect coffee! We did have to lie flat on the beach to escape the wind though! We had a great lunch at Da Marco’s beach bar looking over towards Tavolara island. Good job it was sheltered by the plastic screens as the wind was so strong.  Sandra left on the late afternoon flight and then it was just the two of us again.

We had a great day hiking to the prehistoric village of Tiscali on the 23 May. Yes, you might be wondering why a prehistoric village is named after an Internet service provider! Back in the day of dial-up, we too had a Tiscali e mail address, however the village came first and the ISP founder was Sardinian, hence the name. 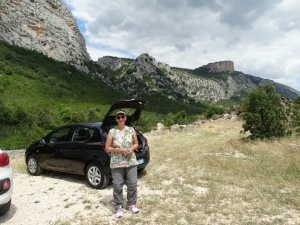 Start of the walk to Tiscali

It was a 2 hour drive south into the high Supramonte limestone massif. Then a 2 hour walk/scramble over rough stone and through forests, with glimpses of the huge limestone faces. We saw quite a few climbers on the cliffs. Luckily the day was dry but not too hot, so the walking was not too tiring.

We met a lot of people coming down and when we got to Tiscali we were the only people there, which was great. The guide/site guardian spoke good English and we spent an hour looking around. The site is under a massive overhang which was once a cave but the roof collapsed long before people lived there.The buildings are 3000 years old and from the Nuraghic period and not much is left of the structures. Very little is known about the site and its people and its almost impossible to understand how they survived there as now there is no water and it’s all rock and hardly any soil. 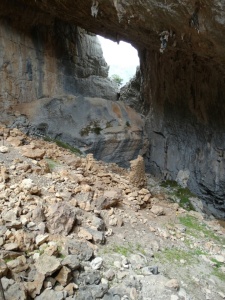 On the way down we met some wildlife!! 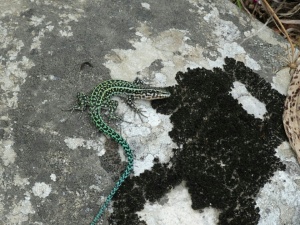 We are now getting ready to head north towards Corsica and Elba before going across to Italy. The weather looks to be improving and we are keen to get moving and our marina contract runs out at the end of May. 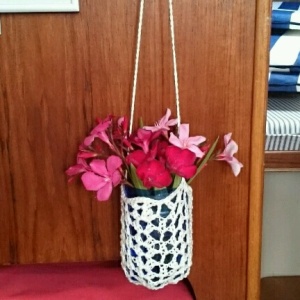