We arrived in Ibiza on the 28th June and dropped anchor in a beautiful small place called Port Roig. It had been a fairly quiet crossing latterly all under engine after we had to take ‘Miss Scarlet’ and the sails down to get away from the shipping lanes, to avoid the constant traffic going north on the Spanish Coast.

We almost thought that we would not make it in time to pick Kirsty and Chris up, as we had intended to pull into one of the many marinas in Ibiza town and meet them there. It is very difficult to find out exactly how much each marina charges as you have to e-mail them individually, which is tricky when you do not have constant internet access. We were expecting the prices to be high as it’s the main holiday season, but were completely stunned when they came back as 150 Euros per night! This was clearly out of our price range but turned out not to be a problem after all, as the marinas were all full as well! This left us with a couple of days of frantic research to find an anchorage where we might pick up Kirsty and Chris from the airport taxi.

We chose Ses Salinas bay, as we could book mooring buoys there for the more normal sum of 29 Euros for a night and it was quite close to Ibiza airport. Typically, the weather did not play along as it was very windy and good surf was coming in on the beach. We got ashore relatively dry and took lots of waterproof bags for the luggage. Kirsty and Chris arrived on time and we had a lovely relaxed BBQ meal at one of the little beachside restaurants.

Kirsty and Chris just after they arrived- still smiling!

Then the fun began. We got pretty wet getting out to Vaila but the luggage survived in the waterproof bags. The boat was going up and down and sideways in the lumpy sea and it was not a comfortable night. Chris succumbed to sea sickness and they both slept in the cockpit, not a fantastic start! Chris had only ever spent 1 night on the boat before and that was while at a marina in Scotland!
Luckily after the awful start things improved dramatically. Chris found his sea legs almost immediately and became a valuable crew member, learning the ropes of sailing. They both need a relaxing holiday and the weather also played along with warm sunny days that were not too hot. 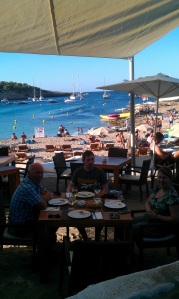 Dinner at Cala Basa Beach Club
We spent nearly two weeks exploring the south east corner of Ibiza and some of the north coast. There were a lot of strong easterly winds forecast which made the east coast too treacherous for anchoring. The island is very beautiful and has wooded hills inland and some stunning coastal scenery and beaches with georgeous red and orange rocks. 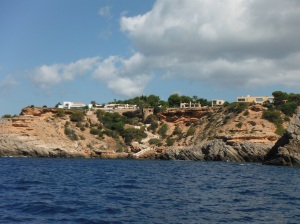 Some of the amazing houses on the cliffs

We spent a few nights at anchor off the gorgeous island of Espalmador just off the north coast of Formentera (south of Ibiza). This area is a nature reserve because of the Posidonia sea grass conservation, so you have to use mooring buoys which are booked in advance. The beach was beautiful with pink fringed sand. There were no restaurants or bars as the island itself is privately owned, so when the day trippers went home there were only the people from the anchored boats. The water was crystal clear and we all enjoyed swimming in the 24⁰ C water. 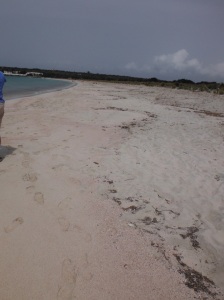 Espalmador with the pink fringed sand

We also sailed up to the north coast. The coastal scenery is really stunning, with huge limestone cliffs, caves and arches and some amazing rock architecture on the off shore islands.

One of the tiny anchorages on the north coast of Ibiza 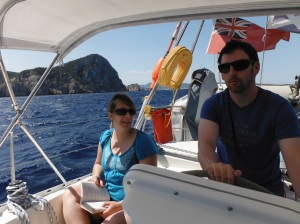 Anchorages were often crowded during the day but by evening the day boats had gone back leaving just a few of us at anchor in the peace and quiet. 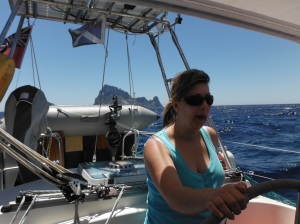 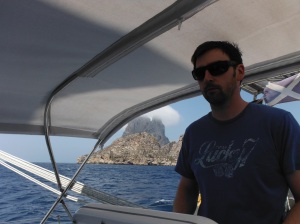 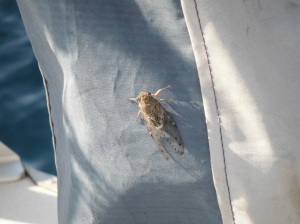 Our Cicada stow away

We anchored one night off an island called Isla Conejera. It had nesting rare gulls (Audouins) and lizards on it, so the wardens told us that we could not land. The sea was inviting though so we went for a swim. Unfortunately, unbeknown to us, there were nasty jellyfish in the area and both Chris and I were unfortunate and got stung! Chris got off fairly lightly but I was caught on both arms and am still feeling the poisonous effects 10 days later! 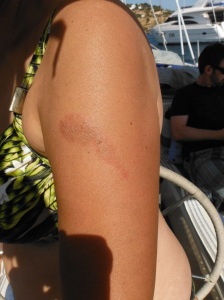 It did not put us off swimming in other bays and beaches but after that we kept a good look out before jumping in the water.

We came into San Antonio bay a couple of times. There are many Calas round the bay that offer good anchorages. Some have exclusive beach clubs in them and we enjoyed a couple of lovely meals ashore at the restaurants. San Antonio itself also has a very large bay where anchoring is free and we could fill up with diesel and water at the marina for the princely sum of 12 Euros for a half hour slot!! There are so many huge boats here, both motor launches and sailing boats (quite a few with liveried “crew”), so marinas can charge what they like and there will always be someone who can afford the fees! Interestingly a lot of the really huge boats are British (often registered in London). It is quite obscene how much money is literally floating around here. At the opposite end of the spectrum, there are also some dilapidated boats in the bay that are lived on but obviously never leave the anchorage. This place obviously attracts some odd balls. 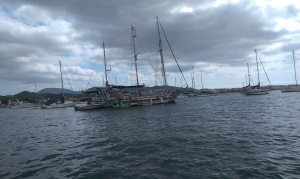 Perhaps someone has been watching “Water World” too often?

Although San Antonio has the reputation as the clubbing mecca, the bay itself is charming and the hotels are not as high rise as on the Costa del Sol or Costa Blanca. Thankfully there is not much noise either, the music is not dance music in the hotels round the bay and is usually finished between 11pm and midnight. Last night we were treated to an amazing Beatles cover band.

Kirsty, Chris and I took a day trip into Ibiza town on the local bus as we had not managed to sail around to that part of the island. I was expecting Ibiza town to be very touristy and busy and we were all pleasantly surprised how quiet it was. The old town is nestled round the fortifications and the Cathedral on the hill and has stunning views to Formentera and along the coast. There are the usual small winding streets, with blue painted door lintels and smart restaurants and shops. 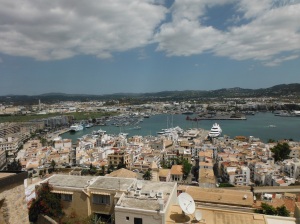 The harbour is busy with large “Balearia” ferries and hundreds of private boats. It was scary to see the huge ferries close up, as we had had to dodge quite a few on our trip to Espalmador.
Kirsty and Chris flew home yesterday so it’s just the two of us again. We had a great time with them and luckily the weather performed except for the first night! We are pleased too that we managed to last out with water and supplies for 4 or 5 days with 4 people on board. We even managed to shower with Andy’s adapted garden sprayer shower, though I am sure that Kirsty will have loved the first “proper shower” back home! 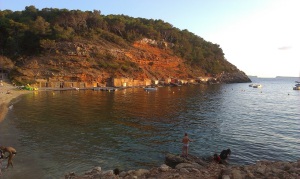 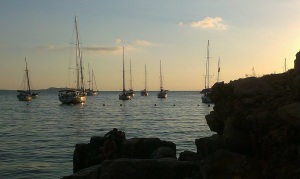 We are really taken with Ibiza and hope to explore the north coast a bit more over the next week or two. The weather looks more settled, as the high pressure seems to be moving in at last. We have been sandwiched between a few low pressure systems in Spain and northern Italy for the last 2 weeks, which have brought strong winds and big swells. It has always been challenging to try to pick anchorages which have little swell, as the swell is not usually in the same direction as the wind and makes for a very disturbed night!