We had a lovely day out in Santiago on Thursday as we wanted to see the town before leaving this part of Spain. It’s only 30 minutes by train from Vilagarcia and the round trip only cost Euro 8 each. The Renfe trains here in Spain are fantastic, clean, punctual and modern. The day was grey and cool when we arrived, which was not bad for wandering round a town. Although we arrived quite early by Spanish standards (1030) the streets were already getting busy. There are so many tourists and pilgrims walking the Camino, so it’s quite a lively place. It’s amazing to think that some people have walked for hundreds of kilometers along the Camino to end up in Santiago, quite an undertaking. 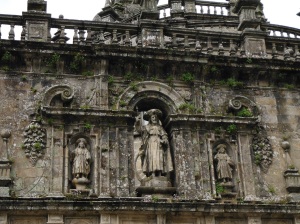 The old town is made up of many little winding medieval streets with houses clustered close together and lovely little squares and cafes and restaurants, as well as the obligatory gift shops. There are also lots of grand squares and buildings befitting the capital of Galicia.

The main focus is the Cathedral and tomb of St James. The cathedral dates back to 10th century AD and is currently undergoing major renovation, so one of the bell towers was completely swathed in scaffolding. We were lucky enough to arrive in time to see the start of the Pilgrims mass, although we did not stay to see the whole thing. The singing was beautiful and it was great to see all the pomp of the priests. We did not see them swinging the huge censor, which weighs 100Kg when full, but we did go through the cathedral again later and could smell the incense. The tomb of St James had a huge queue waiting to file past, so we gave that a miss. 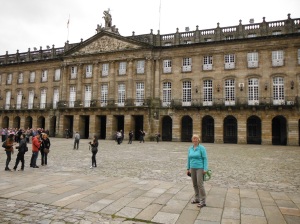 In contrast, outside, the Socialists were demonstrating noisily (as it was 1st May)!!

The weather improved during the day and we were even able to eat lunch outside. We strolled through the streets a bit more and also found a couple of parks. The trees were fully in leaf here and everything was green and flowering. Galicia gets a lot of rain in the winter months, which keeps things green. We found a lovely park which runs along the river on the outskirts of the town. There was Wisteria in full bloom, butterflies were flitting about and the river running strongly. There were obviously lots of water mills in this area in the past as the clues were still visible, mill lades and lovely old houses by the river. The new housing was also nicely designed with lots of open spaces and play parks.

Path by the river with wisteria in full bloom

Santiago new and old (Cathedral in the background)

Our feet were weary once we had walked all the way back to the train station and we were glad to get back to Vaila and a cool drink. Vilagarcia was buzzing with people when we got back. It was a national holiday and the sun had come out and it was hot. It felt like the first real day of summer.

Yesterday (Sat 3 May) was really hot and everybody was out on the beach enjoying the sun. We got the final preparations made and enjoyed the sunshine. We are now ready to set off for the trip further south tomorrow , Monday 5 May. We have got permission to anchor in the national park at the Islas Atlanticas so we hope the weather is settled enough for us to do that.