19th August, Viveiro, Gallicia.
We are now enjoying the delights of the Rias Altas in Galicia, having left Gijon on the 16th August. We started sailing but ended up motoring along the coast as there was not much wind and what there was, from the west, directly on the nose (as usual!!). The coastal scenery here is stunning with big sandstone cliffs and islands and lots of rocks. We spent the night in Cudillero a lovely little fishing village, but now very touristy. The entrance to the harbour was very narrow, not helped by a guy swimming across it towing a rowing boat!
Mooring was interesting as it was on lines fore and aft. You had to pick up the buoy in the middle of the boat and then grab the lines and secure them fore and aft. This was the first time we had done this but we got some advice from another Brit already there (and we had read about it in the Cruising Association notes). We fared better than the Norwegian boat that came to lie between us and a large French one. The Spanish harbour master was shouting at them in Spanish to pick up the buoy which they did not understand, so we shouted instructions to them in English. The French couple were shouting at them too as they thought their boat was going to get bashed! It all ended happily luckily. All the fun of strange harbours and moorings!
We left early the next morning and after another day of motoring we arrived in Ribadeo in the early evening. We saw lots of little crabs swimming on or just under the surface a few miles off shore. We motored through them for about 30 minutes so there must have been tens of thousands!!
Having been in Marinas quite a lot, we wanted to anchor, so found a lovely spot off the beach and had a swim. Water not as warm as we had hoped but refreshing. Everyone was enjoying the water, with quite a few local boats anchored. The boat next door to us was called “Highland Daughter” and we swam over to have a closer look. Although from the south coast of England it had a Scots couple on board (Carol and Gordon) who kindly invited us up for a chat, as they had seen our Saltire flying on the stern! So we sat and dripped on their lovely teak decking and had a good blether until we got cold. Then we had to swim back to Vaila! 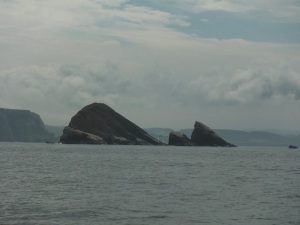 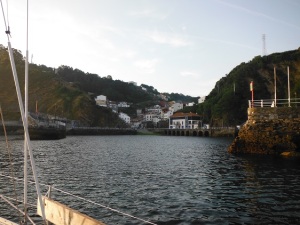 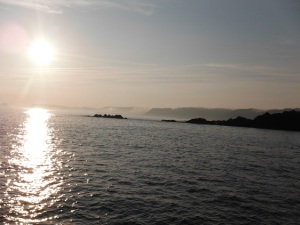 It was not a restful night as the swell made it uncomfortable and we were glad to leave in the morning. So we headed further along the coast leaving Asturias and now in Galicia and did not have so many high cliffs. A few more towns on the coast as well. We stopped in Viveiro and anchored off the most beautiful little cove: yellow sandstone cliffs topped by pines and gum trees, a small beach and crystal clear water. As we were getting the dinghy ready to launch to head for the beach and a swim (the water was even cooler than yesterday), another boat pulled in and hailed us in Scots voices! The Saltire is proving an instant recognition. The boat was “Blythe Spirit”, a 26 foot Westerly with Les and Carol Cowan on board. Originally from Orkney, they now live here. Les sailed the boat over from Orkney with various changes of crew in 3 weeks in July this year!
They invited us over and we had a great chat and we found we had mutual acquaintances in Kate (and Angus) Skinner. Yet another coincidence! The world really is a small place! 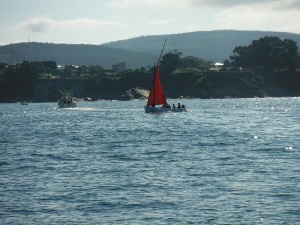 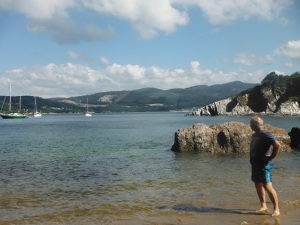 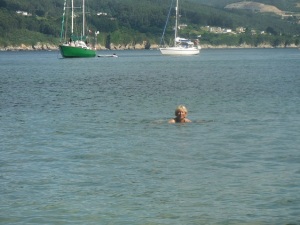 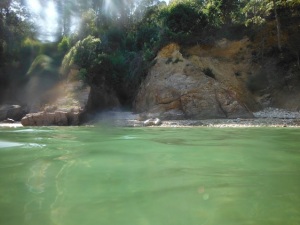 So now we are in a lovely Marina in Viveiro after two nights at anchor and not much sleep. The anchorages were beautiful but there was a brutal swell which did not make for a restful night. This morning we decided to head for the Marina as the forecast was not good for getting to Corunna and the engine has started to make a “funny” noise. I went shopping for “essential” stores, bread, butter, wine, beer …. and when I got back I found Andy in conversation with a guy from the Forth Corinthian Yacht club in Edinburgh (Granton). We used to sail from there many moons ago. His boat “Hyskeir” is even smaller than “Blythe Spirit” that we saw yesterday and they also sailed here across Biscay. Makes Valia seem palatial!!

Cant’ believe how many Scots we are meeting!

Good news Andy has fixed the engine! Now we can relax….